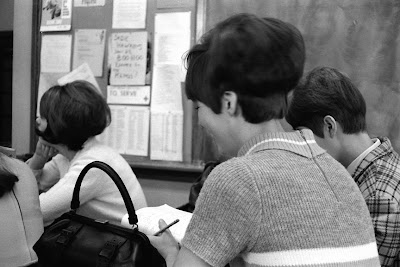 Whew! I am really obsessing/regressing about that upcoming reunion. Today's topic- The High School dress code, or "Shape up or ship out." The stated purpose of the code was to insure an orderly and safe environment in which to further our education, its real intent was much murkier.

Enforcement of gender stereotypes was the number one issue. The wearing of pants on girls was forbidden (even on -20° days) except for cheerleaders on sports days, when they could wear culottes- a skirt with half legs. I think. Mini skirts were banned, although that became a challenge for some girls- although micro-minis were taboo. I think. Jeans made of blue denim were also forbidden for boys (although black or white were OK), that might have been a class-warfare thing. I think. Really, I had no clue as to why the lines of demarcation in the dress code were drawn where they were; thinking about it now makes me wonder even more.

Of course most kids wanted to wear cool clothes, and the clothes that were popular then were rather "preppy." The excesses of the Hippie era started a little later. So, on a whole, we looked "nice." We could all wear pretty much the same clothes* this Saturday at the reunion and while they might be seen as a little corny they would hardly stick out- unlike those of the horrid seventies.

*of course I mean the same style of clothes. Not many of us could actually fit into the clothes we wore in high school.

We had the same weird rules in Delaware.The jeans thing was always a mystery to me, but it was the identical rule. Must have been a sign of the times.