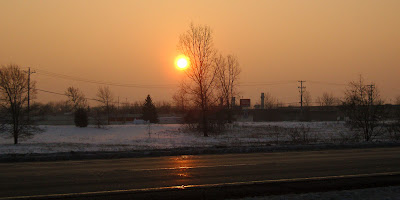 The first snow is usually a tease.

A few flakes, harbingers of the winter to follow, perhaps a thin layer of accumulation on the still green grass of late autumn. We had that visit Sunday morning, along with a bracing wind coming down from the Canadian high plains. Just a snap, it should be back near sixty degrees by midweek. Then Halloween, with the election the following Tuesday, and followed by what appears to be shaping up as a long, hard winter- regardless of who is the new president.

In the northern latitudes, snow and winter is sometimes viewed as a cleansing, the necessary first step of renewal. I'm cautiously optimistic about the elections, in the same sense. I'm usually not too political here, but in the next few days I'll be posting some thoughts about the candidates from the Flippist perspective. In ten days the elections will be over, and a new world- not a brave new one, but new just the same, will emerge from the ashes. The satirical publication The Onion printed a headline in January 2001 that stated: Bush: 'Our Long National Nightmare Of Peace And Prosperity Is Finally Over'.  Satire, when done properly, contains more truth than does objectivity. Here's hoping that the next eight years will be more rewarding than the very bad joke that the last eight were.