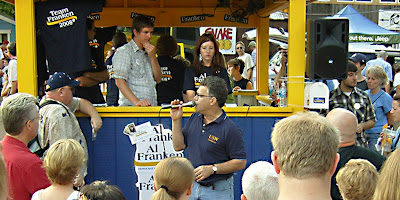 This year's election for Senate in Minnesota is the most expensive in the history of the United States. It is also among the most intriguing. The incumbent, Norm Coleman, won his position six years ago after his opponent, Paul Wellstone died in a small plane crash, Wellstone's replacement was the elderly Walter Mondale. After his election, Coleman boasted that he was "99% better than Wellstone." Tactlessness aside, this remark was the seed that started Al Franken, the noted writer and performer, on his quest to replace Coleman in the US Senate. It has not been an easy task. Franken's past humorous writings have been held against him by Coleman and his operatives, specifically a satirical Playboy article about Internet sex sites in 2000 (described by Coleman as "juicy porn.") while Franken's two #1 best-selling books about political deceit in politics and the media have been ignored. His outrage against what he considers an immoral war in Iraq (and other abuses by the Bush administration) has been used against him as an example of his being "unfit" to serve in the Senate.

Norm Coleman, who started out his career as a Democrat, became a Republican when it was fashionable, is now touting his independence. His support for the war, for putting all Social Security funds in the stock market (?!), and voting for prohibiting competitive pricing for Medicare drugs, all seem to have been motivated by no great personal principle, but merely as a way to be a "team player" in the Bush administration. His refusal to have even one hearing on questionable payments to war contractors when he was the chair of the Senate committee on appropriation oversight speaks volumes about his integrity.

A third candidate, Dean Barkey, Independent, is also a factor in the race and will get a sizable percentage of the vote. He was the main force behind Jesse Ventura's successful bid for Governor of Minnesota in 1998 (when Ventura defeated Coleman), and briefly served in the Senate as Wellstone's interim replacement. His appeal is not limited to any ideology, but rather to those disenchanted with both major parties.

There is another side to Franken. He is a dedicated supporter of rehabilitation (his films Stuart Saves His Family and When a Man Loves a Woman cover this subject humorously and seriously, respectively) and a dedicated family man. If this counrty needs anything, it needs rehabilitation. His heart lies with the people of this country, not vested interests. His only "unorthodoxy" is that he believes good government works for the common good, not a popular idea in the Bush era. That era is dead. Let's allow Norm Coleman to join Bush in leaving public office, Norm's only consistent political ideas have been concerned with his own personal advancement.