The Great Weaver From Kashmir 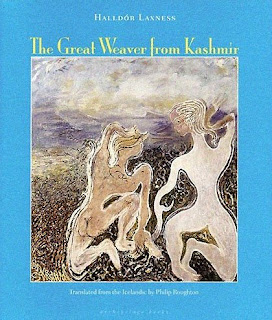 A late winter's snowstorm had left Reykjavík clad in white. After sitting down to breakfast in the day-room of Bólstaðarhlíð 8 I was soon joined by a group of grad students and their advisor who were also staying in the family-run guesthouse. We had a stimulating discussion over muesli, smoked fish, cheese, breads and, of course, skyr- none of which the students would touch but I found delightful. The doorbell's chime signaled the arrival of Þora, an older woman who would be the students' guide as they compared the Icelandic educational system with their own experiences.

Conversation turned to the city and its landmarks, notably Hallgrimskirkja, which brought forth a scornful comment from Þora, who thought that the towering cathedral was in poor taste and disrespectful of Hallgrímur Pétursson, its namesake. "We should have never left the Catholic Church, either."

So began my introduction to one of the still smoldering religious questions that has haunted Iceland for centuries. The Great Weaver from Kashmir continues this education.

Halldór Laxness wrote this unusual novel when he was 23 years old, at which time he was a practicing Catholic. This book was definitely born of that experience, large sections of it are dialectics about sin (usually meaning women), perfection and the relationship of man to God. During the time he was writing it Halldór was involved in a prayer group whose aim was to reinstall Roman Catholicism over the upstart Lutheranism as the state church in Iceland (although it too had once been the usurper, driving out paganism in the year 1000.) Laxness was struggling with many religious and political questions (as were many others in the aftermath of WWI) and this book covers them in almost tedious detail at times. If Laxness hadn't been such a good a writer this book would be as insufferable as trying to engage in meaningful conversation with a verbose, narcissistic young man. The "hero" of the story, Steinn Elliði, leaves Iceland and his adolescent sweetheart Diljá in a quest to become "the most perfect man on earth." His journey takes him deeper and deeper into the mysteries of the "one true faith", estranging his family and ultimately his humanity in the process. That Steinn's life is portrayed as a downward spiral and not a spiritual ascent shows the conflict Laxness endured; in the book lively domestic scenes exist in sharp contrast to the drab, internalized life of the abbey.

As with Laxness' World Light, (1937), this novel has a searching central character. Whereas Ólafur in Light is a light-hearted ne'er do well, Steinn plays his part in dead earnest. Even more of a contrast is comparing Weaver with Laxness' next novel Salka Valka which had the very much grounded and human Salka facing her difficult and often grim reality head-on in a way which would be unconceivable for the selfish Steinn. The other Laxness coming-of-age-novel, The Fish Can Sing, (1957) possesses a gentle, almost magical realism which is also far removed from the struggles of the unhappy Steinn.

The Great Weaver from Kashmir, while a must for Laxness completists, is a tough go for the general reader, possibly Halldór's most difficult work currently available in English.

Be sure to also check out Bill Holm's review of this most unique book.

So THAT'S what the book was about! I never could make much of it, one end or the other....

Did you have to read it for a class? Or for penance?

I read it because my best friend had read it and I wanted to keep up with her. Don't think she made much sense of it either, we were probably too young to appreciate it.

I loved your review, Batty! Now that I can finally read it, having belatedly completed my own. I am delighted that you discovered Bill Holm's review, too...I learned a lot from what both of you had to say.

And, I'll have another Laxness surprise for you in, oh, about two weeks!

The Munson review, unlike yours and Holm's, reminded me of Steinn at his worst (most youthful?): wordy, pretentious, and low on content. Munson had a few things to say, but most of it sounded like he was throwing words around with intent to dazzle rather than inform. Or maybe I'm just dense. Hmmm....

He did seem to be straining a bit, trying to make it fit a premise that it really didn't match. I liked his reference to Under the Glacier a lot, but then, that's a favorite of mine.