I met a girl who sang the blues
And I asked her for some happy news,
But she just smiled and turned away.
I went down to the sacred store
Where I'd heard the music years before,
But the man there said the music wouldn't play. 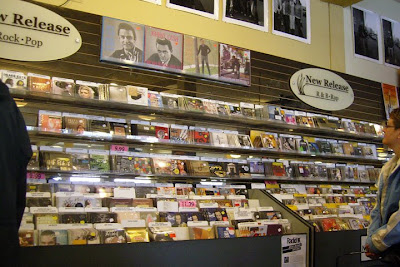 An old Hippie in-joke (inspired by an underground comic book's cover) was the origin of the name of this now venerable Minnesota institution. "The Fetus", as it is commonly referred to, is a head-shop/music store. It lives on in this digital age, if not exactly thriving, still offering a wide variety of music, trendy merchandise and "smoking" accessories. I had a chance to stop in Saturday (on a Valentine's day outing) and the place was busy, if not exactly packed. The stench of mixed incense hadn't changed one bit in 40 years, neither has the general look of the place since they moved into and converted it from an old hardware store about 35 years ago. One thing that hadn't changed either was the depressing music that is played at thought-numbing volumes. This has always been a weird constant. The store has a great selection of music, with an unparalleled depth in country, rap, blues, jazz, international, and local. Of course there are the usual pop and rock titles. The clerks perversely insist on playing their favorites- complete albums- and DJs they are not. Maybe they're getting forced (i.e.; payola) to play that dreck. 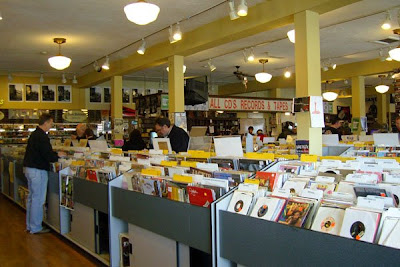 What had changed was the growth of vinyl, both vintage and new. It had been phased out almost completely in the 90's, and is now back with a vengeance. With big-box retailers stripping down their music sections to a least common denominator format, hopefully this place will be able to hang on for a while in its role as a cultural anachronism.

Boy, THAT brings back memories! I think I still have a copy of the "Fabulous Furry Freak Brothers" somewhere. The "Fetus" has a branch in Duluth, but I hardly ever get that far south.