My My Hey Hey 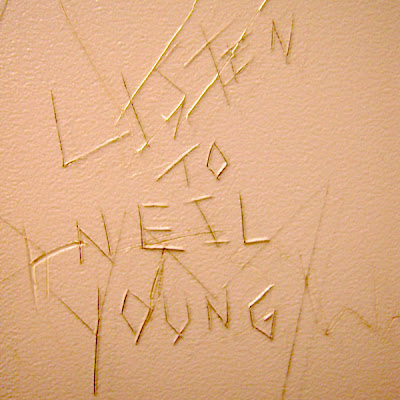 A bathroom stall is a forum for those voices who are unheard in normal literary channels. While usually reserved for topics concerning bodily functions, sometimes musical criticism appears (Disco sucks!), although usually not with such messianic fervor as the above example.

Neil Young. Not only are some people still passionate about him and his music, but he continues to create new projects which are received with critical and commercial success. Not quite on the level of Bob Dylan (his youthful idol), but he still can "bring it" in concert with searing guitar solos and inspiring singing. I've always had a grudging (grunge-ing?) respect for Neil; I've seen him in concert (1971 and 1999) and some of his songs are favorites of mine. Not all of them; he has been know to mangle a metaphor or two and has been downright scary (Down By The River) at times. His "one-note" solos are either inspired minimalism or trite self-indulgence, depending on my mood.

Keep on rockin' in the free world, Neil, it's better to burn out than fade away.

Did you just quote Def Lepard there Batty?

or was it the Disco Sucks reference?

"It's better to burn out than fade away"-ok I looked it up. Def Lepard copied that phrase in their "Rock of Ages" song.

Also: Kurt Cobain quoted it in his suicide note.

I wish I did not have this information swilling around in my brain, but I do.

A little "suicide tourism" won't hurt, it's when you want to immigrate that the trouble starts...