New things do arise from time to time.

The blogosphere exploded in 2004, as did my isolation. Suddenly everyone was a publisher. People from all over the world suddenly appeared in my laptop. The Flippist Phoenix arose from its ashes and, via this blog, connections were made- India, Korea, New Zealand, the east and west coasts, and... Iceland.

An old friend who heard of my trip suggested an exhibition of photographs. I took it one step further by adding text to my photos, text from one of my blog-sources. E-mails were exchanged, plans were made, and the show happened. The pictures were overshadowed by the blog-posts of an Icelandic correspondent: 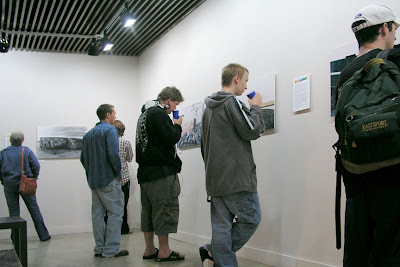 But that was as it should have been.

About this time, the dreams started. In them, I was in Iceland, trying to get somewhere or meet someone. So realistic as to be unnerving, but really not unexpected. My obsession grew.

I was discovering new artists with new ideas, almost on a daily basis, all coming from that tiny country. I saw Sigur Rós play in Minneapolis, the next day I began planning in earnest for a third visit to Iceland. I had missed the music scene again when I was there, I made sure I didn't this time. The curious reader can pick up that thread in the archives, October 2006.

Since that last trip, my perspective on Iceland has changed. New sources of information, more literature, much broader perspectives. But a definite shift had occurred. The fire was not burning as brightly, other problems now occupied my attention. Then; disaster. With the kreppa now in the world's spotlight, what was once my idle curiosity had changed into something altogether more serious. Iceland's explosion of culture- much of it was financed and supported by the very banks that are now ruined. I watched helplessly as some of my favorite places disappeared, one after another, places that weren't even a part of high finance- as if they were mice, crushed by the falling elephants: 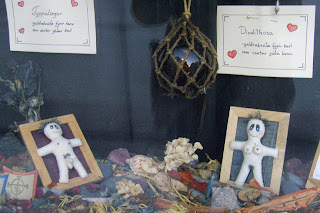 Change is always a constant, but this time I can't just can't seem to adapt. It's harder to make plans, any target I aim for is moving too fast for me to follow. Blogs and bloggers come and go, it's a lot of work to keep one going. What is left for me in Iceland, of its culture and people, remains to be seen. Regardless of whatever does happen I'll always remember my "Golden Age"- my own personal Icelandic saga.

Will you be keeping Bill Holm's fire burning, fuelling your own work? That is a nice thought, innit?

I have faith that you will adapt and find there is so much more. Mourn the losses, but be open for the new discoveries. There is still more waiting for you.

... I'll have some happier thoughts to share on Friday.