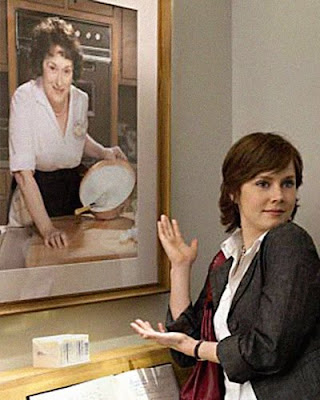 The film Julie & Julia finally got me into a cinema for my annual summer flick. It seems as if I have seen a film starring Meryl Streep in a memorable role every summer for many years: Mamma Mia last year, The Devil Wears Prada before that, A Prairie Home Companion, The Hours, Adaptation, etc. In her portrayal of Julia Child, Meryl tops them all. Amy Adams does a convincing job as Julie Powell, a real-life blogger who attempts to cook all 500+ recipes in Julia's Mastering the Art of French Cooking in a year. The two stories are woven together in Nora Ephron's masterful screenplay and steady direction. The film's conceit may actually be a little too "neat", but in a summer of violent and/or dumb blockbusters I'll take it without complaint.

There's another symmetry in the film, a symmetry in the relationships of the two women with their spouses. This depiction is a most welcome change in a filmed drama. Men and women actually can co-exist in supportive harmony! Who'd a thunk it? There is some friction between Julie and her husband, but that is more about Julie's blogging mania (sound familiar to anyone out there?) than any disrespect or deceit. The two stories trace a similar arc, and the conclusion, which of course is no surprise to anyone, is nevertheless very satisfying. A wonderful film.

I really loved this film--just saw it recently. My favorite part was the Julia Child component, and the depiction of her relationships, especially the one with her husband Paul. I am currently reading My Life in France and it is simply delightful. As my daughter said, "I want Julia Child for my best friend!"