I managed to dash between the raindrops on my way back to the Nordic house. Pascal Pinon, a group consisting of four 15 year old girls, played a memorable set of their quiet and very personal songs: While simple in structure, these songs (in both Icelandic and English) were carefully constructed, but they often came to an abrupt end- which was actually refreshing after hearing acts in the last few days who didn't know when to stop. These songs all had complete lyrics, often with many stanzas. This is the kind of musical experience which is rare- an honest look into the mind-set of adolescent girls, untainted by show-biz and uncorrupted by age and cynicism. They spoke afterward in an informal Q & A, discussing how they came to write the songs and who their musical influences were- "mostly each other" was the answer to that question:

They even had a self-produced EP in a numbered edition! 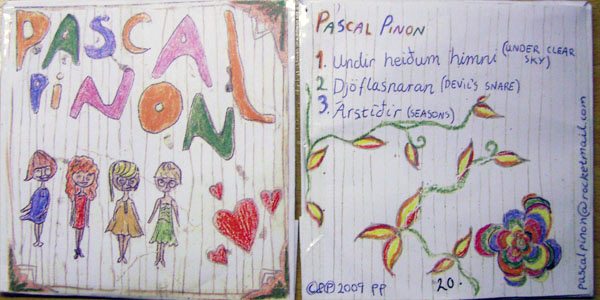 When asked about writing in Icelandic versus English they mentioned that Icelandic was better suited to poetry, which was evident in their lyrics, even to this non-speaker. The whole experience added up to another wonderful Airwaves moment.

After a delightful, , if somewhat poignant, afternoon spent over coffee with an old blog-pal, I took a little break back at my apartment to recoup my strength. After wards, while strolling down Hverfisgata, I stumbled into an art opening, the highlight of which was this black swan sculpture: 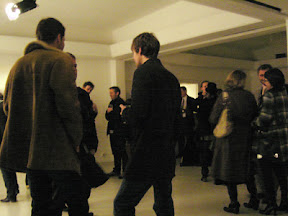 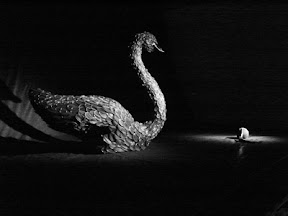 I was really looking for a place to eat, but before I found one, I saw the Ojba Rasta band playing groove tunes with a Caribbean flavor in the Karamba coffee house: 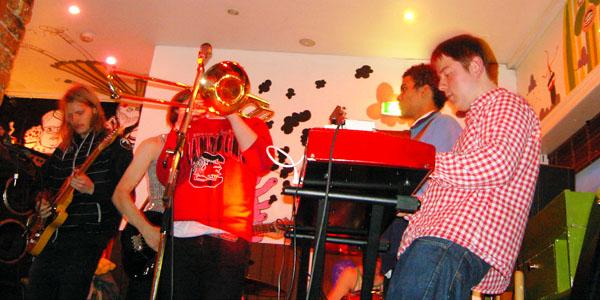 Later,  I went over to Þjóðleikhúsið, the National Theatre of Iceland, to see their production of Frida ...viva la vida: 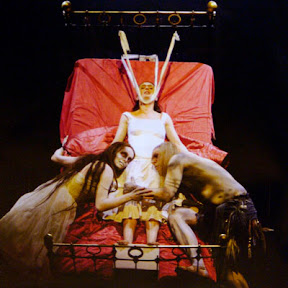 Post-play found me heading back to the Reykjavík Art Museum, where I came across the notorious Dr. Spock, who had pulled a trailer into a street, blocking traffic, and did a riotous set of their surf-punk-grunge-whatever. The first act I've seen which had its own fire-eater:

The final act of the night at the museum was Páll Óskar singing with Hjaltalín. Páll is a national treasure of Iceland; he was resplendent in his sequined suit. This was a show sung entirely in Icelandic, for Icelanders, and a complete joy to behold:

As I write this at 3 AM the music is still going on in various clubs, but I doubt that anything could top Páll and the entire crowd singing along on every song. This day started with a most special experience and ended with a musical performance I'll never forget:

Did I count correctly that you hear 13 bands the other day? OMG!

I love listening to songs in Icelandic. It is a very poetic language. I understand a lot of it, because it is similar to Swedish. Wish I was there! Those girls sound like they were quite the show. Also, I dig their style.

Cellar ~ Their MySpace page has three or four songs you can listen to, just wonderful stuff!

If you open the two videos in different windows you can synch them!