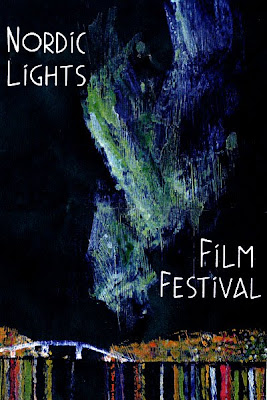 Whenever there is a showing of a new Icelandic film in town I naturally try to see
it and today there were FOUR! Two features, Skrapp Út and Heiðin and two shorts, Síðastibærinn and Bræðrabylta were shown at the venerable (read: old and smelly) Parkway theater in south Minneapolis. Lately, I've been following Ben Hopkins' English language blog about Icelandic films and Heiðin (Small Mountain) was rated highly there as well as at IMDb. Skrapp Út looked a bit dodgy, and I had already seen The Last Farm, and they were being shown at 11:00 AM, so Heiðin and Bræðrabylta won by default. The Weaver graciously consented to join me and we made the thirty mile trek to the theater, where we were rewarded with real Norwegian candy in the lobby:

Bræðrabylta (Wrestling) about two gay Icelandic wrestlers, was a short film that almost defies description. Icelandic wrestling is very stylized- the contestants grasp straps on their opponent's thighs and attempt to throw them to ground. As they maneuver for an advantage it looks very much like close dancing. It was really pretty good, a little heavy on the symbolism, yet very naturalistic. Johann Johannsson's fine score helped make this odd little film feel "bigger" than it was.

The feature, Heiðin, was a film that started out as a slice of life of a small northern Icelandic town on election day, but slowly changed into a multi-generational family study. This was another "small" film, with very good acting and straightforward direction. The plot developed nicely, if very slowly, and reached a surprising conclusion (with a nice cameo from the singer Hafdís Huld.) What kept this from being a really good movie was the atrocious "Music Library" soundtrack by the hack composer Danny Chang- awful, tasteless disco/synth. Why wasn't a talented Icelandic composer used?

I've mentioned it before, but these festivals are becoming all digital projection now. It was so awful, I'm really thinking of never going to one of these again.

We topped off this mixed bag of a day out with coffee at the nearby Cafe Levain, a restaurant built around a commercial bakery, where we sat amidst the supplies: 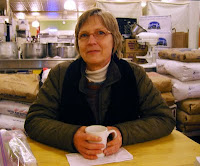 Hi, Weaver!
So Batty, do you think someone like me would notice the difference between digital film screenings and the real thing? We so seldom go to the movies. There havee been a number of screenings of Fresh The Movie here--I'm thinking probably those are digital screenings ...

They are easy to spot- very dark images, very washed out colors. If you sit close to the screen when the camera is panning or there is action, all you can discern is a mess of digital hash.

I have seen some digital projection that is pretty good, but those are generally Hollywood productions in newer theaters. They were very detailed, although still had problems at times with saturation and highlights "blowing out."

The Icelandic documentary which I saw in Rekjavík (Guð Blessí Ísland) was shot on video, but looked pretty good- whether it used video projection or not I couldn't say.

When even my non-HD DVDs look better at home than the theater experience, you know there is something wrong.