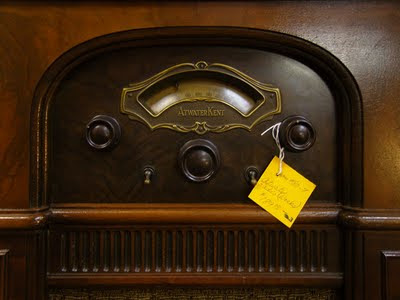 The first modern mass media was the radio. It was qualitatively different from newspapers, in that the user was a passive recipient- unlike a newspaper, which had to be be read, the radio was just there, a voice in one's ear, and perhaps the greatest vehicle for advertising ever invented.

With the advent of the internet, all of the previous mass media forms- print, radio, and television have been incorporated but the interface is still a bit clunky, but it is quickly getting better in all aspects. But it requires more user-interaction than those other forms of media. The user has to navigate, make selections, and pay attention, the passive experience of TV and Radio has been replaced by an addiction model. We crave our "Fix", be it Facebook, Twitter, email, and yes, even blogging.

Are the results worth it?

To be consistent with your metaphor, would you say that some people -- perhaps late 17th or early 18th century -- were "addicted" to newspapers?

Hey now. I grew up on one radio channel oot of Winnipeg that only came in while the sun was up in the cold months, and not at all when the leaves opened on the trees and I grew up just aboot perfect eh.

Jim ~ One of the causes of the American Revolution was the independent press - bloggers of their day?

SCW ~ Don't let that monkey climb on your back!

Munkay ~ you can climb on my back any day!