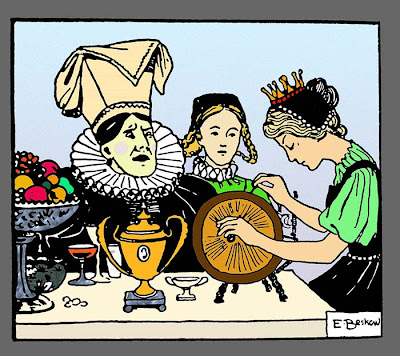 Christmas brought me a whole new "Mount TBR" this year, I try to cover it in a little more depth (with a little more height?) later on. For now, I'd like to share with you a little from Swedish Folktales & Legends, edited by Blecher and Blecher (Pantheon, 1993.)

Drawing primarily on 19th and early 20th century sources, this is an amusing collection, not quite on a level with the Brothers Grimm, but considerably earthier, almost ribald at times. All the permutations of evil stepmothers are here, along with clever and courageous children, and oodles of monsters and trolls. Some are pithy observations on the facts of life:

Once there was a man who left his fiancé after she happened to fart.
Later, when he passed by her house, he saw her outside searching
through a pile of garbage. He asked her what she was looking for.
"I'm looking for a pin," she answered.
"You'll never be able to find it, " he said.
"Well, I'm as likely to find a pin in a pile of garbage as you are
to find a wife who never farts."
He considered this, and took her back.

I laughed so hard at this I tooted!

that sounds me like "You never know what you have until you lost it " but this is a little different uhmm...like "Do not despise what you get, is better than nothing" anyway I found it very interesting this kind of parabola ?
~

What a great story to tell a kid!