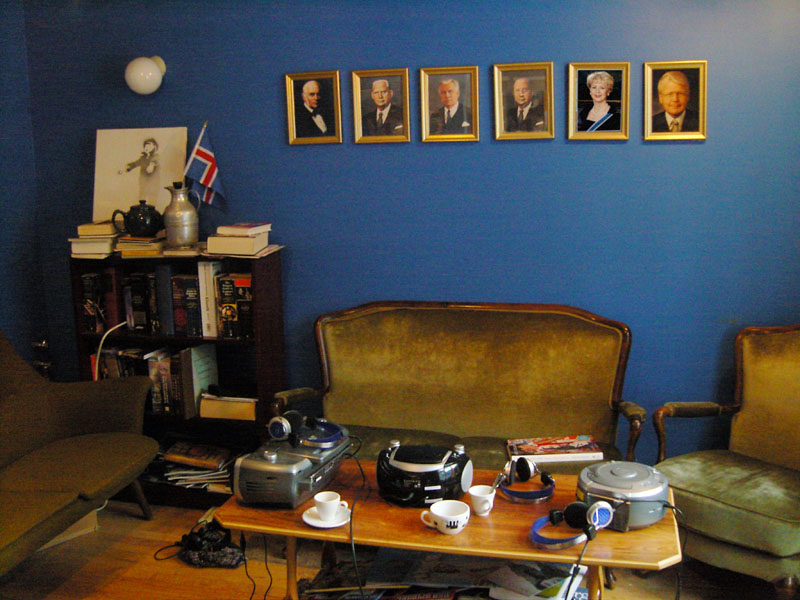 Parlor of the record shop 12 Tonar, with Icelandic Presidents on the wall


The scene was a small cafe overlooking Nauthólsvik, a small bay in Reykjavík. It was March of 2004. Three women and a somewhat over-matched American tourist were engaged in a lively discussion. The women were nurses, celebrating the end of a work-week, and the man was me, before I had adopted my "Batty Professor" persona.

The talk covered many topics: Halldór Laxness, the war in Iraq, Icelandic investment banking(!), blogging (!!), and gender- and the way in which it affects the lives we lead. On the basis of what I had read, and knowing that Vigdís Finnbogadóttir had been the President of Iceland, I opined that Iceland seemed to be a very advanced in the matter of women's rights. I was greeted with laughter and a disdainful snort. Evidently, there was a lot I needed to learn about that.

Now, almost exactly six years later, that conversation I shared with those three women was brought to mind by this post in The Guardian. Iceland's parliament has enacted a law which will make it illegal for any business to profit from the nudity of its employees. The Icelandic congress, the Alþingi, has seen many women elected to it since the economic collapse of 2008 and the subsequent change of governments. The current prime minister, Johanna Sigurdardóttir, is also the first woman in that position in Iceland's history.

So there have been changes. The Icelandic law may have been passed to stop a tide of prostitution and white slavery from Eastern European countries. It certainly has the support of the populace.

Now if we could do something about the war in the mid-east...