Listening to Sgt. Pepper's in Mono 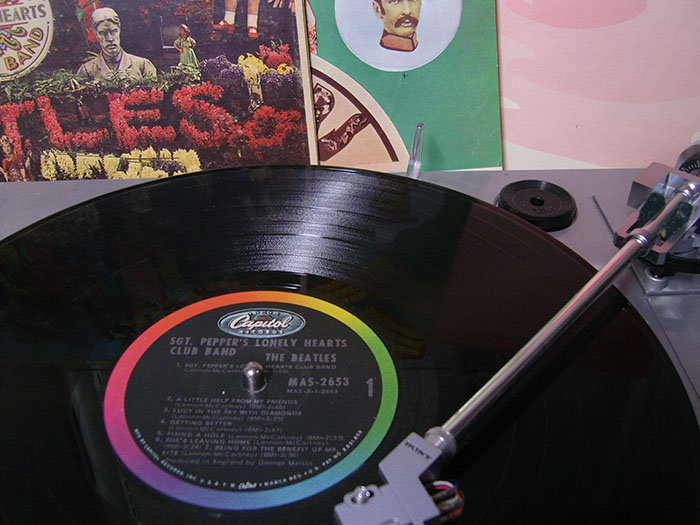 My personal mono copy, with insert and sleeve

I was home alone on Saturday night. NPR was playing a show featuring The Beatles' Sgt. Pepper Lonely Hearts Club Band album. The radio was in the kitchen and I was just on the other side of the open door, sitting in the dark in the screen porch. The show had a group of commentators: critics, musicians, songwriters, fans- each of whom sounded off with reactions to the album as a whole and the music in particular.

The host tried to insert a bit of controversy into the proceedings by having some contrarians on who pooh-poohed the notion that Pepper was a great album. (albums thought better: Rubber Soul, Revolver Radiohead's OK Computer). I'm not going to rise to that bait. People have different tastes, it is a question better left unasked.

The show did play the whole album, track by track, including the two songs cut from it, which were released as a double-sided single- Penny Lane and Strawberry Fields Forever. Imagine the reaction if those two had been released with the others! (I would have rather had them than Within You, Without You and Lovely Rita, but then, that's just my taste!) They also augmented the album with studio outtakes, demos and backing tracks.

As the show went on I got deeper into the music, and I became aware that I was hearing it in mono. It wasn't the mono mix that the Beatles personally spent 40 hours on, it was the "modern" CD stereo mix, but reduced to one channel. My Kloss radio, while musical, is mono-only. It sounded good, actually a little clearer than what I remembered of my vinyl LP, but different. The drums sounded better- and despite what some people may think, Ringo may have been the best instrumentalist of the group. His playing is expressive, at times brilliant, and never in the way. He never sounds like he is laboriously laying down tracks. The album is obviously heavily "produced"; it would be fun to hear some of these tunes played live, as Jeff Beck did with A Day in the Life.

Taken as a whole, Sgt. Pepper's was a tremendous artistic achievement, an international cultural event, and in a way that is hard to imagine now. The individual songs have their own appeal, but the album in its entirety becomes far greater than the sum of its parts. The show touched on that fact, one college professor who teaches a unit on Pepper bemoaned the fact that her students didn't appreciate it as whole- the songs were shuffled into "tracks", and the cover art and lyrics were shrunken or non-existent. None of them seem to have the time to sit and listen to a whole album, in the way the artists intended it.

In my screen porch reverie, all of Pepper came rushing back- The Beatles helped define what music could be for me and many others. Their earlier and later albums were good, with arguably better songs, but this album stated that music (and life) could be great, that life is full, and a splendid time is guaranteed for all...

My copy is in stereo, but my Beach Boys "Surfin' Safari" is a mono. It was a Christmas present from my 8th grade girlfriend. My cousin and I performed "She's Leaving Home" for our assorted parents. Probably not a nice thing to do.

I think all the Beach Boys stuff was in mono, until Pet Sounds. Brian Wilson was deaf in one ear, he didn't like stereo for some reason...