"Cracks" in the MSPIFF 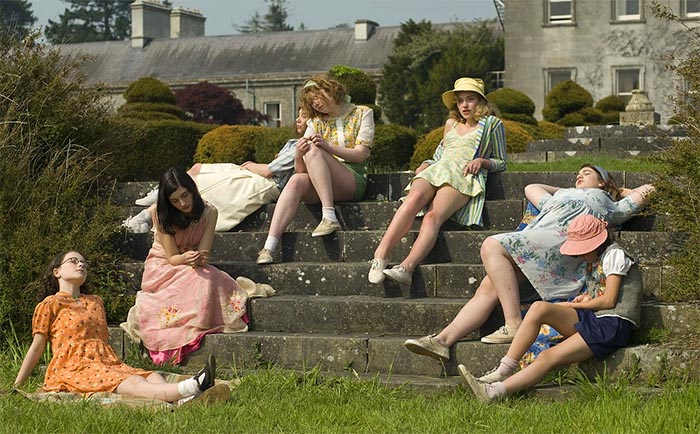 It's mid-April, which means that the Minneapolis-Saint Paul International Film Festival is underway. Now in its 30th year, the MSPIFF brings a sense of world culture to the windswept prairies and a welcome break from a spring which has yet to be "sprung"- I drove home from the screening through a mini- snowstorm. This year's offerings seem a little lackluster- too much competition from other festivals perhaps? Many of the films offered were several years old and had been bouncing around the circuit (and cable TV) for a while. I did manage to find a few entries of interest, one of which played Friday night.

Cracks, directed by Jordan Scott, was a girls' boarding school drama set on an unnamed island in England in the mid-nineteen thirties. The island setting is appropriate- the "team" of girls and their faculty "leader" are living a sheltered existence, in a world of artificial order suppressing desire and spontaneity. Cracks form in this alternate universe when a worldly girl with a past arrives from Spain, upsetting the status quo and shattering the group, with devastating consequences.

That description may come across as a mix between Lindsay Anderson's If.... and William Golding's Lord of the Flies, but the film it should be compared with is the 1931 film Mädchen in Uniform. The strong theme of self-destructive homosexuality in Cracks made it seem as if it had been written in the thirties, and as the film progresses the "cracks" it develops are in its character motivations.

The acting is all first-rate, with director Jordan getting the most out of "girls", especially Juno Temple as Di, the team captain. Eva Green, as Miss G, the team's adult leader, carries the heaviest dramatic load in a part which is a little underwritten. The film is at its best when it shows the girls being girls; the awkward theme of sexual perversity disappears during a beautiful midnight skinny dip sequence.

Thank you for reminding me about the festival. I went tonight and seen a Canadian film about one of my childhood hero's, David Susuki.
Munkay

Munkay, I aim to serve!