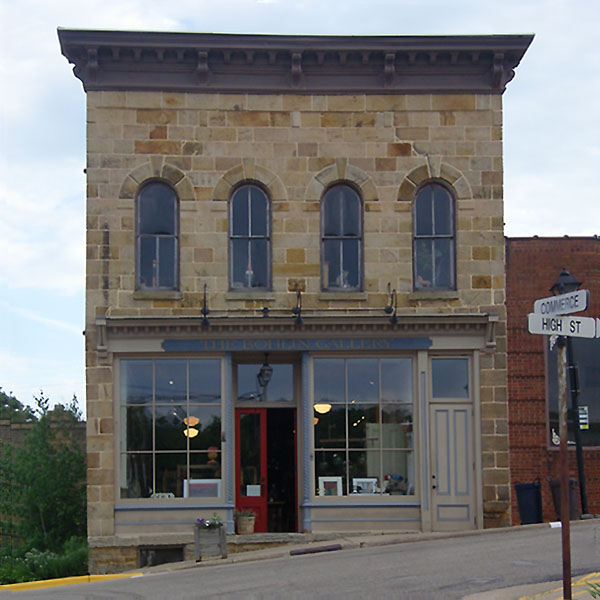 It was well past seven p.m. Most galleries and shops were closed, but this one had the lights on, with the door wide open. I walked into the shop and, with the exception of a very old German Shepherd, it seemed to be unoccupied.

"Hello? Is anyone home?"

I turned around and still didn't see anyone.

"Can I help you?" There was an older woman in the corner sitting on the floor, wedged between a stairway and a wheelchair.

"You're quite sure you don't need some help?"

"No, no, I'm alright." She was fiddling with the wheelchair, moving it into position, then locking the wheels. I tried to be nonchalant; it was clear that her resolve was firm. I walked around the shop. She began to ask me the usual questions- "Why did you come to Mineral Point? Where are you from?" I answered, and we began a conversation, her on the floor, I turned around so as not to embarrass her. After a few minutes, she rolled up in her wheelchair, evidently none the worse for wear. I asked about the enormous looms (a Glimakra and a Weavers Delight) which sat in the back of the shop, yes, she was the weaver- although from the looks of them (and the general disarray) it had been a while since they had been in use. She spoke of the shop, of her ex-husband who had once been part of it (his wood-working sign was still hanging in the back) and about books. Of course, Halldór Laxness came up; I should keep one of my spare copies of Independent People in my car. We talked for a while, but I had to get back to the cabin, I suspect she was on her way upstairs when she had fallen.

And so I left her, promising to return tomorrow, I asked again if I could do anything, but she said that she was fine. I did return the next day, the door was open, I went back in, but there was nobody there, not even the dog...

I worry about people like that, even as independent as they are/want to be. It must be a struggle.

You should always have a spare copy in your car. You are following in Bill Holm's footsteps. Next you'll have a little fisherman's cottage by the sea in Iceland ...
If your friends come to visit you in MN, you KNOW they'll come visit you in Iceland!

An Icelandic literary emergency roadside kit! I'll put a saga or two in there, along with an Indriðason and a Bill Holm. YOU NEVER CAN TELL WHEN SUCH AN EMERGENCY WILL OCCUR!

Better make sure you have a couple of helmets, too ...

I'm just writing to see how big this is. You were 20 miles from me! I hope you waved at me as you drove past! :)

Cellar Door- I'll get to the mustard museum next time!