Desire Amidst the Faroes 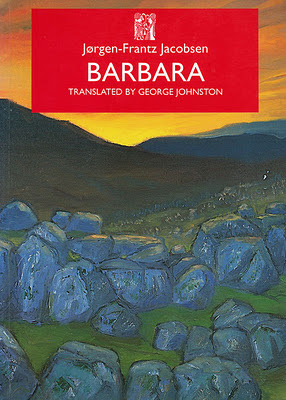 A novel by Jørgen-Frantz Jacobsen
Translated from the Danish by George Johnston
Norvik Press, 1993

This is the third entry in my Faroese Authors series. Jørgen-Frantz Jacobsen was a tragic figure- this is his only novel and was written as he was dying from tuberculosis. The manuscript was taken from his deathbed and prepared for publication (the book wasn't finished) by his friend and literary contemporary, William Heinesen. First published in 1939, it quickly became a classic of modern Scandinavian literature. Barbara is a tale of an 18th century Faroese woman who remains a free spirit with an eagerness for sexual adventure in spite of the consequences. She acts thoughtlessly at times, but has no personal sense of sin.

Although the plot is simple, it is not the standard fallen woman story. The effects of her actions can be tragic (for her lovers), but she is not evil. Some of the townsfolk call her "wicked, wicked Barbara" but others are not so harsh in their judgement, for she brings light into the dreary lives of many. Her only vice, if it may be termed such, is that she can't be be tied down to any one man.

This conflict is played out over a variety of locales in the Faroes, these set-pieces are described with a sumptuous, almost cinematic quality. Barbara's sensuality as well as the cast of well-drawn secondary characters all come to life in the absolutely fabulous writing. The ambiguous ending meshes with the story's lack of rigid moralizing.

The first English translation of Barbara was done by Estrid Bannister, who was a friend of Jacobsen and was the real life model for Barbara. It might be fun to compare the two translations. Although Johnston writes vividly and seems to capture the Faroese idioms, I can't help but think that Estrid's version might possess a special charm of its own.

Next week: The Old Man and His Sons, by Heðin Brú.

This sounds really good. Not too easy to get ahold of in my neck of the woods. Lovely cover, isn't it. where did you acquire your copy, Batty--online?

I got a library copy of a paperback through Amazon. It wasn't expensive. The writing really sings, a very pleasant reading experience.

The cover is a detail from a painting by William Heinesen!