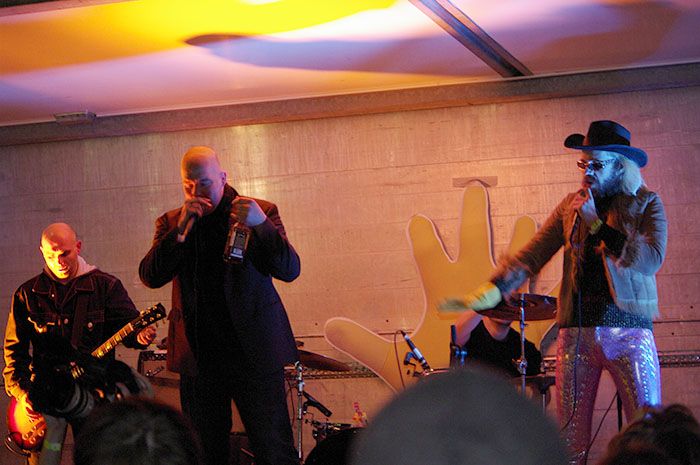 The Iceland Airwaves Music Festival starts today! I don't have any direct links to the festival this year, but here are some good on-line sources of information:

A wide selection of videos from this year's Airwaves along with other, related video, is at Wim's IMM site.

Auður's HD videos from the downtown hostel are almost unbelievable- the camera is right next to some of the performers!

Columbia College is sponsoring a group of journalism students who are covering this year's Airwaves.

And, of course, the Airwaves Site itself.

According to Airwaves Insider Bob Cluness, next year's Airwaves will be held in November. This is a terrible idea, the weather is much worse, and there is about an hour less of dimmer daylight every day. It also means that some of the airports which Icelandair uses seasonally (Minneapolis, for example) will not be available for Airwaves patrons. In 2009 I had to go through Boston's Logan which added a full day's travel time (including a night spent in that horrendous airport) and $500 to the cost of the trip.

Of course, I'm not in the desired demographic. The festival has always been aimed at Western Europe; limiting it to nearby countries might well make some economic sense. Few Americans are interested in anything foreign, and the cost of an Airwaves package, while reasonable, is higher than the disposable income of most young people.

The new player in the Airwaves festival is the Harpa concert hall. Construction was started before the economic collapse, and I suspect that it needs to be used as much as possible to cover the construction costs. There may be more profitable uses for the hall in October, I don't know. I do know that the days of glorious fall weather spent exploring Reykjavík and the surrounding countryside will be greatly diminished for the Airwaves patrons. If the weather is foul enough it may discourage festival goers from ever returning to Iceland, which is exactly opposite of its original intention.

Hi Stephen,
I think Airwaves wants the American people to.
Most visitors of my blogs are the Americans.
I asked a friend (Veerle, Belgium) to write an alternative review, an another friend (Markus, Germany) to take some photographs.
Hope to see you IRL in 2012! Nordic House?
Greetings,
Wim

I'll be there, unless Icelandair has other plans.

Mary- check this out:

and I will be there!

Okay, you have me checking airfares to Seattle. Would be extravagant and foolish.

My son lives there, so it won't be such a foolish extravagance for me, although just to be in the same room with Ólof Arnalds again will certainly be worth the cost of the trip!

We had a professional film maker tape the whole deal at the Downtown hostel and will be releasing the videos in the coming weeks and months when they are ready.

Thanks again, Auður! I enjoyed "being there" in the room via your videos, I'm looking forward to the "Pro" versions as well. I really liked the ones of Manu Delago and Samaris, and also the one of Ólöf and Klara at Harpa.