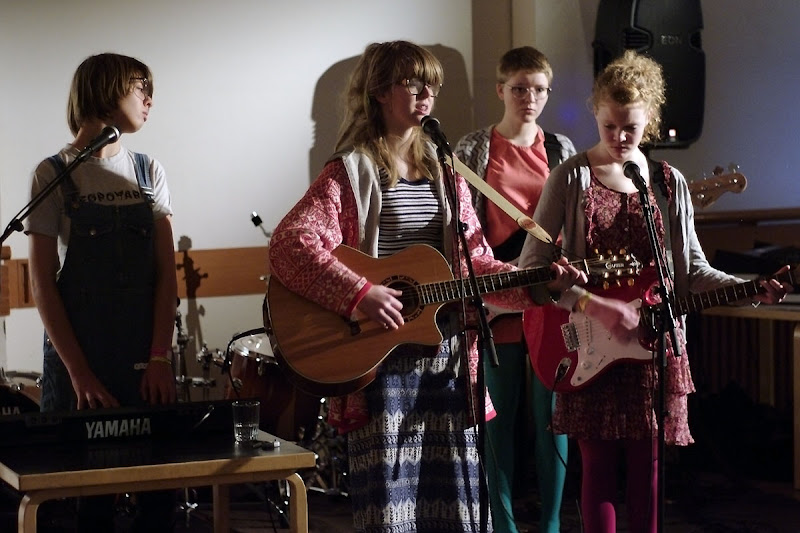 Until I hear their new CD. In the meantime, check out what they are up to via these links:

Audio (In Icelandic*) of Pascal Pinon playing outdoors with reactions of swimmers at the Vesturbæjarlaug pool...

The thing to remember about Pascal Pinon is not that they are so young, it is that they make great music. Jófriður's seemingly innate songwriting ability is what differentiates this group from other teen-age acts. Best wishes to them on their fall tour (rumor has it they will tour Japan next year!)


*Rough translation of video caption:
Pool Guests have a pleasant surprise
Visitors to Vesturbæjarlaugar received more for their money last Saturday when the band Pascal Pinon performed there on the pool deck; part of the Off-Venue agenda of the Iceland Airwaves festival. MonitorTV  arrived and took the opinion of pool visitors to this non-traditional concert.

**Rough translation of Blue Bird site:
Pascal Pinon is a project of the Icelandic twin sisters Jófríður and Ásthildur. Together with two friends, she decided at the age of 14 years, to revive her room with her ​​enchanting music. For their first live show "The friendly concert" had to serve the twins' room. A short time later, they played numerous gigs in Reykjavik and played a debut album. They borrowed a house in the small town of Vogar and began recording with only one microphone. What emerged there are wonderful teenage stories - a potpourri of acoustic neo-folk and low-fi pop. On their first tour they also stop at the Blue Bird.