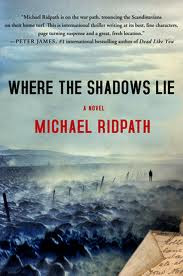 Where the Shadows Lie

A novel by Michael Ridpath

Scandinavian crime fiction is so hot these days that it is little wonder that non-native writers would want a piece of the action. Michael Ridpath is a Londoner who started his literary career writing financial thrillers; this is his first “Magnus Jonson” detective novel. Magnus is a native Icelander who had moved to Boston while in his teens and where his father was murdered. This spurred the young Magnus to become a policeman and then a homicide detective. He kills two hitmen in Boston while investigating a drug ring, and is sent to Iceland for his own protection. When he arrives he is immediately swept up in a series of murders involving a lost Saga, obsessive Lord of the Rings fans, and a family with a millennium's worth of secrets. The plot’s major twist involves some letters from J. R. R. Tolkien inferring a real-life connection with the “Ring of Power”. All that, along with plenty of action in exotic Icelandic locales, makes this novel a good source for an action movie.

Needless to say, this is not a subtle examination of Scandinavian psychology. It is a page-turner however, and even becomes a cliff-hanger at times. It also refers to recent news events in Iceland. Things there have changed so much recently that the book already seems somewhat dated. That said, Ridpath has done his homework concerning the Icelandic particulars; the places and cultural references are, for the most part, accurate. The weakest part of the book is his protagonist, possibly the most unappealing detective since Joe Don Baker’s Mitchell. Part of my distaste might come from the author’s prurient attitude toward Icelandic women. I’ve run into that before, is this some UK travel writer’s sex fantasy thing? The Icelandic women I’ve met wouldn’t give this slob the time of day. There is another title in this series, 66° North.

I don’t think I’ll regret it if I miss that one.

Not touching this book, but I'm curious where else you've observed the UK travel writer's Iceland sex fantasy thing?

When I first started reading Icelandic blogs in 2004 this topic came up often. Evidently at that time there were "sex tours" of Iceland promoted in the UK. There is a great scene in the Icelandic movie Dís which also covers the topic:

It isn't the greatest movie, but it gives a good look at a young Icelandic woman's lifestyle.

Thanks for the Bjork review. Love her music...

"IMPLY/INFER
These two words, which originally had quite distinct meanings, have become so blended together that most people no longer distinguish between them. If you want to avoid irritating the rest of us, use “imply” when something is being suggested without being explicitly stated and “infer” when someone is trying to arrive at a conclusion based on evidence."

I stand corrected on prurient, I stand on inferring.

Okay, on closer reading I agree with your use of inferring. Would you agree to this though: the letters imply a connection, but the plot infers one?

O~ Probably the other way around. The details of the letter are revealed about two-thirds of the way into the book, before that the plot inferred a connection, but the letters (and some related information) give some substantial facts. The book as a whole, like many mystery novels, becomes somewhat absurd when looked at realistically.