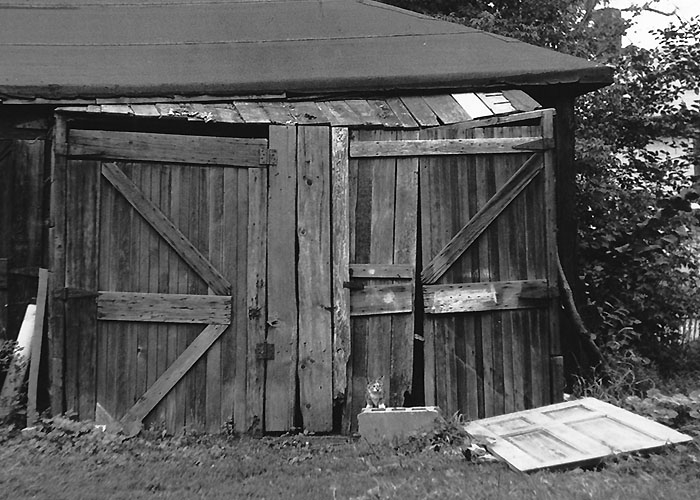 I had been living in a small house for years, renting it from an agreeable Mexican landlord who lived next door. One day he moved out and asked us if I would like to rent both houses. Knowing several people who were looking for affordable housing, I said yes without hesitation. After the landlord moved out, we quickly got a group of people together and settled in. This shed was in the back of the lot. The landlord said to use whatever I wanted from it. It was packed with boxes and cans, old wood, appliances, even a barrel of umbrellas! But the roof had been leaky for some time and everything in it was rusted, moldy or decayed.

I just ignored it for a while, but when the kids started to come it obviously had to go. So we knocked it down, got some dumpsters, filled them and had them hauled away. We planted a nice flower garden where the shed stood and gradually the place actually became kind of  pretty. I was surprised at the difference. It is one thing to have a picturesque building to photograph. It is quite another to live with what was essentially a big pile of trash. I had been getting down on myself and my lot in life for a while; getting rid of this junk made a big difference in my outlook.

Thanx a lot, NOW I have to clean my garage. I have procrastinated, but winter is coming, finally in earnest to Northeastern Michigan, with a storm front slated to bring the weather we have been spared, so far.

Grasshopper and the ant...

Today i can finally get the car in the previously inaccessible garage, so thank you, mr. Professor Batty. You gave me the push i needed. Of course, i had to chevelle a ton of snow to get the car in.

Just cleaned out the upstairs bedroom, myself. I noticed once the junk was out that it was sunny and nice up there. In the back of the closet I had found an old quilt I made, an inspiration from Van Gogh's Sunflowers and Starry Night, combined. I had kept it hidden after no one wanted to buy it on Etsy. But then I put it up, and it looked great. Made me feel so much better. Why was I keeping that in the back of a closet?