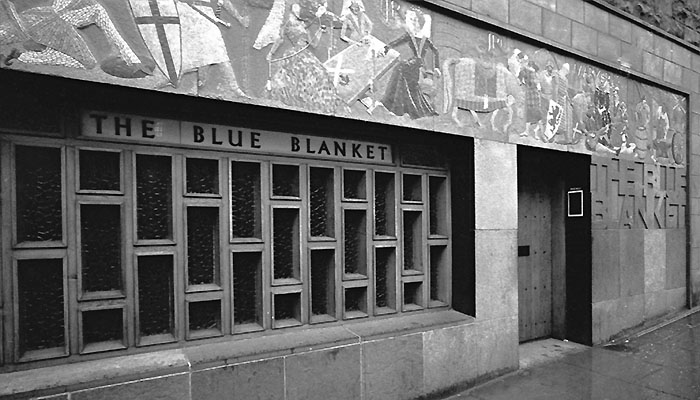 Truly an odd couple—the aimless rebel and the aspiring medievalist.

Touring ‘Fair Albion’ on a shoestring. The trip had gotten off to a rocky start but by the time we made it to Scotland things had improved—somewhat. She did manage a smile or two, but it quickly became obvious to the both of us that our relationship would never be the same.

Once the bond was broken all those little quirks which we once found adorable in each other quickly became insufferable. Vanity prohibits me from enumerating mine, but her disgusting fixation of chewing on some ratty shards of her acrylic ‘blue bankie’ soured any remaining enjoyment I might have had on the trip. She used it to fulfill the same needs as Linus Van Pelt did with his ‘security blanket’ in the Peanuts comic strip.

When we chanced upon The Blue Blanket public house in Edinburgh, I thought it would be amusing to snap a picture. I suggested that we dine there, but she perceived it (and rightly so) as a thinly veiled insult.

We came back to the States and even lived together for another eighteen months. The ‘blue bankie’ finally disintegrated completely, as did our relationship. Both our lives really began then—she went off to Harvard Law School and a degree, I got married and pursued various artistic interests.

I want an autographed copy of whatever this compilation turns out to be! I still don't know if they are stand alone vignettes or part of a bigger story, but I like them a lot. Always leave your readers wanting more. And we do!

If you don't say "fiction" at the end, can we assume it isn't?

The fiction pieces are always identified as such- they are part of something I've been working on for a while. The other "thought pieces" are as true as I can remember them; they're mostly just me trying to deal with some semi-resolved issues from my life- often inspired by one of my old photos, as this post was.