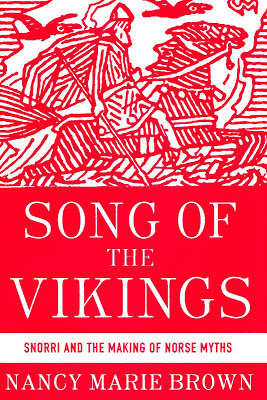 As befitting my "Iceland Year" I end with a review of a book about Snorri Sturluson, the Icelandic storyteller and writer who wrote down most of the Nordic myths and Sagas which survive to this day. This isn't a heavy tome, the writing is light and concise, but it is fully annotated for those who would like to delve further. The author gives a detailed history of the life of Snorri and attempts to link later works such as Wagner's Ring Cycle and Tolkien's Lord of the Rings with the original Icelandic sources.

For the most part Brown succeeds, although  the end of the book tends to be more of a list than an analysis. In spite of this it remains a good introduction to the somewhat unsung man and his work.  It would be a great help to anyone who was beginning to explore the "old stories."

I'm thinking of reverting to a less structured form of blogging.  Structure imposes its own limitations and I feel as if I've been losing the spontaneity which was always a feature of FITK—consciously, right from its beginning.

The serial fiction will be wrapping up in the next couple of months, read it for free while you can, I will convert it into some kind of e-book—if I can figure out how.


See you next year!

Ms. Brown also has a blog "God of Wednesday" that is in the same vein.
Happy New Year professor!

And a Happy to you as well, don't freeze!