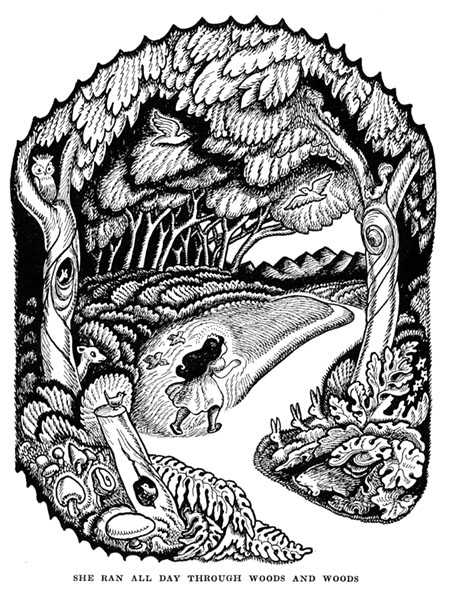 Mirror, Mirror, on the wall,
Who's the fairest one of all?"

"Queen, thou art of beauty rare
But Snow White with ebon hair
Is a thousand times more fair."

Today is the anniversary of the birthday of my favorite Minnesota artist.

Yesterday I picked up an original edition of her 1938 version of Snow White and the Seven Dwarfs. Wanda did the illustrations and the translation. The story is similar to the Disney version, but more nuanced. In it, Snow White is a child of seven, not a grown woman. Sheis tricked three times by the wicked queen. All’s well that ends well, for after she took a bite of the poisoned apple she slept for many years until a handsome prince is entranced by the princess in the crystal casket the Dwarfs have made for her. He persuades the Dwarfs to let him safeguard the princess, but when the casket is dropped the bite of apple falls from her throat and Snow White is restored to life, she marries the prince and, at the wedding dance, the evil queen is made to wear red hot shoes which make her dance until she perishes.