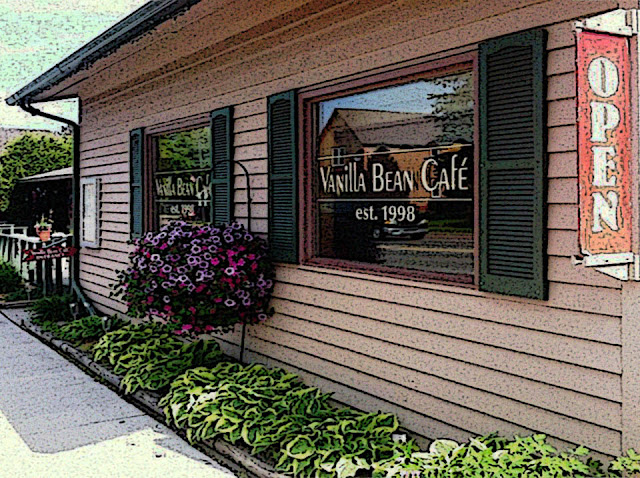 After three hours on the road (and six hours since breakfast) the need for sustenance became apparent. "The Vanilla Bean Cafe and Bakery"- how inviting! We pulled into the side parking lot and left the car to go inside. On the way to the front door we passed by a row of Harley-Davidson motorcycles- big ones. Oh my...could be trouble...a vision of Marlon Brando in "The Wild One" emerges in my fevered imagination...oh well, you can only die in a gang-fight once, right? We entered.

Inside, there were only frazzled tourists, like ourselves. No signs of the hooligans- perhaps they were at the bakery next door. The server bade us enter a side room, wherein she proceeded to sit us right next to the bikers! With leather jackets, chaps and proper motorcycle boots, long hair falling down over their collars and...

... and it was carefully braided, on four young women and a girl, all absolutely beautiful in a fresh-air, wind-blown, healthy, no make-up way. Their parents sat in the corner, also in leathers, keeping an affectionate eye on the girls. When their food came, one of the Mothers led both tables in a silent grace. They ate their meal in a pleasant, congenial way, with no bickering or sibling jealousy. We ordered, and while we waited spent time admiring the “Coffee Art” which adorned the walls. A Finnish couple had perfected a way to make oil paintings with coffee as a pigment (think shades of brown) and, according to the guide, had exhibited in Finland, Iceland, California and Minnesota.

As we sat enthralled by all this beauty (the girls, not the pictures) the biker group began to migrate, from table to table, to the bakery next door and the bathroom. They then came back, one at a time, and proceeded to crowd into the corner until all nine were sitting at a table meant for four. One of the Biker Dads told a story, quietly, and then they arose, en masse, and departed.

Later, I mentioned to the Weaver that “They were like the Amish, except they had Harleys.”

As of this morning "The Bean" is still there and still open every day.

We usually stop in when we're in the area.