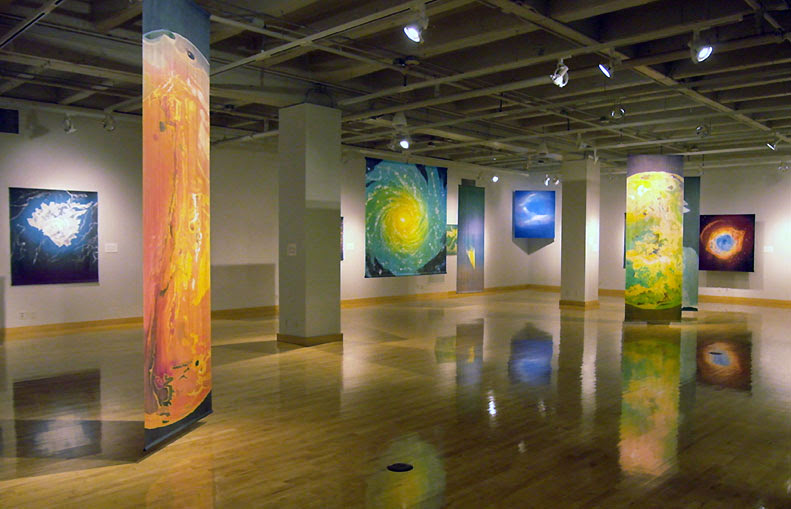 A short road trip brought the Weaver and me to the historic town of Northfield Minnesota last week. Northfield was the the last place the notorious James-Younger band ended their crime wave in 1878 when a bank robbery went wrong, leaving several people dead or in prison, with Jesse James a hunted fugitive until his murder a few years later.

But that was then, we were there to experience Mary Edna Fraser's Mapping the Planets in Silk and Sound, a collection of large scale batiks depicting various astronomical scenes. A mix of ancient and modern technology, Fraser takes NASA images and converts them into hanging tapestries for a truly ethereal exhibition. Located in the Flaten Gallery on the St. Olaf campus, the airy space (with a hurricane-like ventilation system), the show was augmented by Mark Mercury's trippy soundscapes.

Would Jesse James have approved?

Ooooh! My old stomping grounds. I was in that very gallery on the first of June! I heard from the locals a week ago that, as usual, no one was injured in the "Defeat of Jesse James Days" annual re-enactment. I think the soft side of Jesse would approve.

I like how, in the picture, everything reflects off of the floor.

Jono ~ we actually went to the museum and watched a video of a reenactment, then went into the bank itself!

CD ~ it looks like the paintings are floating above a lake.

Were any of her Chesapeake Bay pieces there? Did you buy any? (Ha! too big to be affordable, huh). You got to see her work in person before me

No, only the "Cosmos" series, plus a few smaller things. Very impressive. Nice campus.