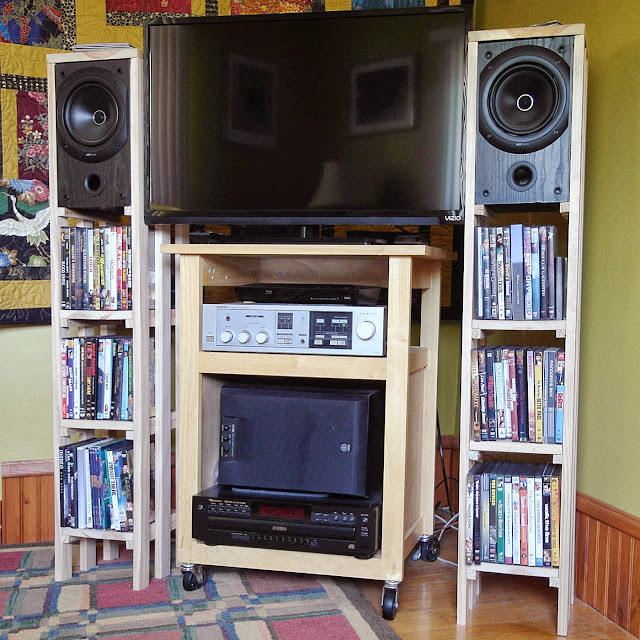 The Flippist Media center occupies a small corner of the living room; we keep it constrained there in order to keep the rest of the house safe from its corrupting influences. It's an odd mix of old and new technology: thrift store audio,  a new LED TV and Blu-Ray, perched up an old microwave cart and flanked by homemade shelves. Few of the DVDs are new (except for the Icelandic movies—kind of hard to find them second-hand here in Minnesota).

The DVDs are a mix of genres and directors. The Coen Brothers have their own shelf, as do the Icelandic. The rest are movies which I think I'll watch again, some Kubrick, some Wes Anderson, a few Woody Allen and some musicals. I've reviewed many of them here, and I have even lent them to friends and family on occasion. In spite of the push to "the cloud" I think this form of media will be around for quite a while: they are just too cheap,  available and their play-by date never expires.

TV is a whole 'nother critter. We only have broadcast, which limits our selection (which is a good thing!), but the image quality is usually higher than cable (whose interface seems stuck in the early eighties). What broadcast TV will consist of ten or twenty years from now is hard for anyone to predict, particularly if true HD quality broadband internet becomes ubiquitous and cheap. The Blu-Ray player does have internet capabilities, but is so clunky that it is never used. That situation may change, however, if the new Apple TV box coming out in November actually does integrate various content providers.

The best part of the system is the audio- DVDs generally have better sound than CDs and my old Onkyo amp with coaxial KEF speakers and the Yamaha subwoofer does a great job. No surround sound though, it gives me a headache.