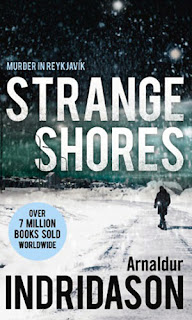 Fortunately, I received my copy of this, the last book in the series, only a few hours before leaving our my recent trip.  I read it in one sitting while cozily ensconced in an antique bed in my room at the Calumet Inn in Pipestone, Minnesota. In a way it was fitting, for the hotel is said to be haunted, Arnaldur’s book is also filled with ghosts from the past. The previous two books in the series centered around his colleagues in Reykjavík while Erlendur was on leave, revisiting his childhood haunts in the East Fjörds. This book tells the story of his absence.  While still a child, Erlendur had been caught in a snowstorm with his younger brother and father. The younger brother was lost in the storm and never found.

It so happens that other people had also turned up missing in another, earlier, storm in the area—a group of British soldiers and a local woman. The soldiers were ultimately all accounted for (some died) but the woman's body never turned up. Erlendur starts asking questions out of curiosity, perhaps spurred on by the similarity with his brother’s disappearance, but soon finds himself reliving the event through the memories of aged pensioners. This is not a book for fans of action. Most of it is in the form of dialogs, many of those who Erlendur interacts with are in nursing homes. The book has an exceptionally dreary mood: it is overcast, cold, damp and dark, filled with lives of regret and suspicion.

The book has two endings: the ending of the story and the ending of the series. The story’s end is melancholy. The series end is fitting and, in a strange way, spiritual and uplifting. I wouldn’t recommend reading this entry first; the reader should have at least a few others read in order for this volume to make its maximum impact. My other reviews of the series are here.

I'm in the middle of this one! Liking it much more than the last two, but probably because I've always liked this brother in the snowstorm idea. Looking forward to see how it ends now!

It's the only one left for me, also. I'll probably miss it when it's done.