Waitress in a Greasy Spoon

We left our room at the Lazy R Motel looking for dinner. Walking down the broken sidewalk to the small prairie town’s main street we found what looked like a nice place but it was closed. Prowling; stomachs growling. We couldn’t find any other place other than a bar that was open on a Tuesday night.   We ended up back where we started, across the street from our motel was a “grill” which had looked a little sketchy the first time we passed it. 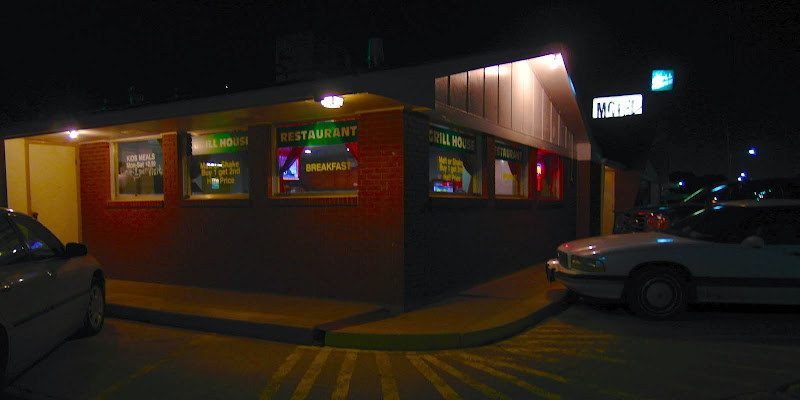 “How bad could it be?” I said to The Weaver, trying to put a positive spin on the situation.

We soon found out.

Inside there were a half-dozen tables and three booths along on wall.

”Sit anywhar..." said the hostess, a frazzled young woman in street clothes who motioned to the half filled room. The O’Reilly Factor was blaring on a widescreen TV in one corner, playing at volume loud enough to drive any semblance of rational thought out of my skull. We went to the farthest corner from the TV, into a corner booth with slashed black vinyl seats wrapped around a chipped Formica table top.

”Up there.. " She pointed to a whiteboard that had the same entrees on it.

I ordered the the steak with a salad bar. Salad bars are pretty iffy in better restaurants and this one aimed low and it hit the mark. The canned peaches were OK.

While we waited for our food a local in the booth next to ours began giving his version of The O’Reilly Factor, offering contrapuntal variations on the vitriol emanating from the screen. When the food finally came, it was served with a brusk  “Here ya go... ”

The steak was more greasy than juicy, but I was too hungry to care. The baked potato, wrapped in foil, was OK. The vegetable was canned corn. The Weaver had a Mexican dish which she ate without comment.

We finished, got our check and went up to the register to pay.

“Like it?” Said the young woman. She was making an effort at hospitality but it looked as if she had other things on her mind. I spotted some stretch marks above her breasts, half-exposed by the open collar above her oddly shaped belly. 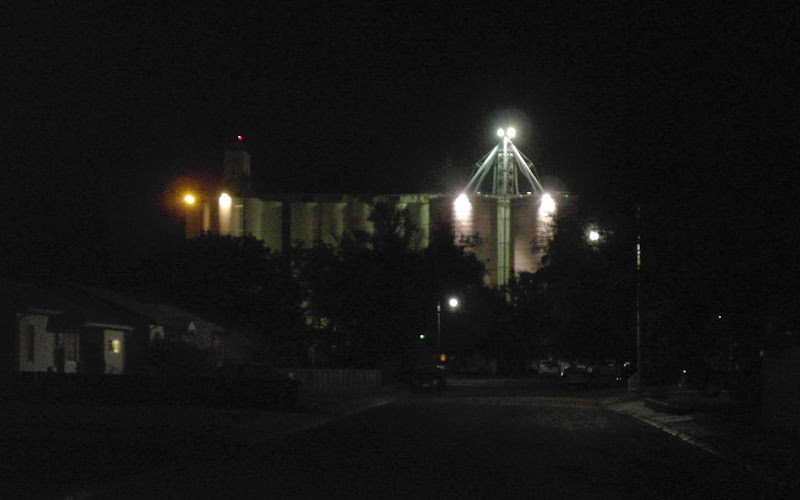 Outside, we could hear a roaring noise coming from the grain mill down the block, lit up in the darkness.  I told the Weaver that from the hostess’ appearance I thought that she might have been postpartum. The Weaver said she had heard her talking about “the twins.”

Back in the motel, I thought the hot water was out until The Weaver figured out that the faucets were hooked up backwards.

Thanks Batty. If I ever go to Kansas I'll bring food.

We'd have been OK if we were there on a week-end.

Kansas is not quite as bad as Nebraska, but I feel you. I feel as though I have been there, at that greasy spoon.