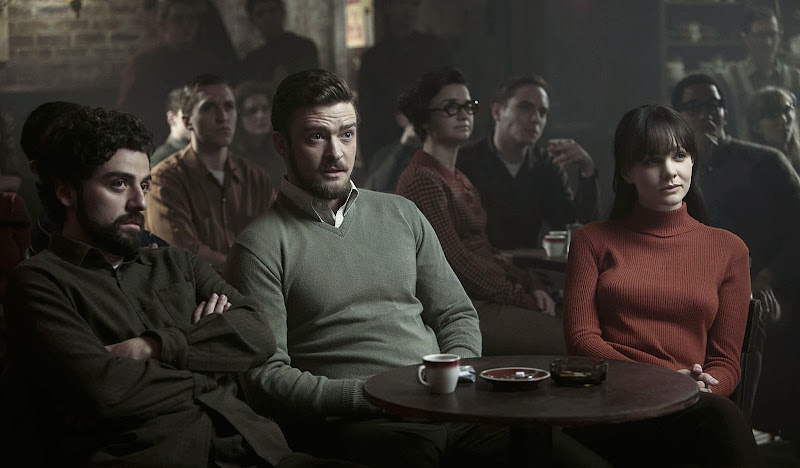 Inside Llewyn Davis, 2013
A film by the Coen Bothers

The Coens have “done winter” before, in their icy-black comedy Fargo, but this time the laughs are few and the blackness is grayer. Llewyn (Oscar Isaac) is a not untalented “folk singer” who can't seem to catch a break—he’s too busy sabotaging his own career. Taking place over the span of about a week, Llewyn bounces from one couch to another while alienating people who are his supporters, losing a couple of cats, and taking some hard knocks along the way. This film is a character study, with nuanced performances all around. The cinematography (Bruno Delbonnel) is moody and evocative. The best “feel bad” movie of the year, it is another great film from greatest brother duo in the history of film direction.

Underlying the film lies a rumination on success, failure, integrity and authenticity.  Llewyn has integrity and failure, but no authenticity or success. It is a question posed to any artist who must not only sell his art, but also himself. A young Bob Dylan appears at the end of the film, marking the end of an era which is seems to be over for Llewyn. The ending is deliberately ambiguous, suggesting either that Llewyn has come to grips with his failure and is ready to move on or he has embraced a cycle of failure as the price of experiencing artistic success. Highest recommendation.

The Secret Life of Walter Mitty, 2013
A film by Ben Stiller

This is the other “holiday” movie which I saw this season, it is a considerably lighter and brighter (PG rated) film that I simply had to see in the theater—the middle of the film was shot in Iceland—and man, did they ever let it shine! Walter Mitty is an archivist for Life Magazine who has difficulties in engaging with reality at times. He has an interest in co-worker Cheryl Melhoff (Kristen Wiig) but doesn't have the nerve to act on it. Walter ultimately finds his “mojo” through a series of real-life adventures involving a mysterious photographer and a lost negative. It has some elements of fantasy and the shifts between reality and Walter’s imaginings are handled well. It is pleasantly non-raunchy. The film has a surprisingly satisfying ending. Walter learns the value of his own regular life, finding himself in the process and is finally able to start a relationship with Cheryl.

But forget all that analysis. Iceland is the real reason to catch this film. Lots of helicopter shots of the country (Iceland is also used as a stand-in for Greenland and Afghanistan) and an extended scene between Stiller and my favorite Icelandic actor, Ólafur Darri Ólafsson (pictured above). This film is a must for Icelandophiles—Iceland has never looked better on screen—and is a pleasant (if not terribly challenging) diversion for any non-jaded film buff.

One side note: Although both of these films were shot on film (and are gorgeous to look at) there have been rumors that traditional film manufacture and processing may soon cease, as early as this year! Both Stiller and the Coens have mentioned that these are probably their last movies shot on film. Secret has a sub-theme about the conflict of digital and analog photography, while Inside was post-processed to give the movie a very "60s Ektachrome" look.

Wish I lived closer to theaters. SIFF will be showing a film about Eyjafjallajökull on the 19th. Looks like a bunch of good Nordic/Scandinavian films coming up. Part of the Nordic Lights Film Festival.

P.S. If only I could get to Seattle easily.

I'd bet most of these films will be in Mpls at the end of Feb.:

See if you can sneak away for a couple of days, you can stay here…

Careful what kindness you offer Batty, I might just take you up on it!

Saw and enjoyed both of these films but was a bit disappointed that Inside's message wasn't clearer. And the connection of the opening and closing scenes was murky to me as well. Maybe it was the wine with dinner?

Anyway, if you haven't seen it, be sure not to miss Nebraska.

I'm a big Bruce Dern fan - I saw Hush, Hush, Sweet Charlotte in the theater when it was first released!