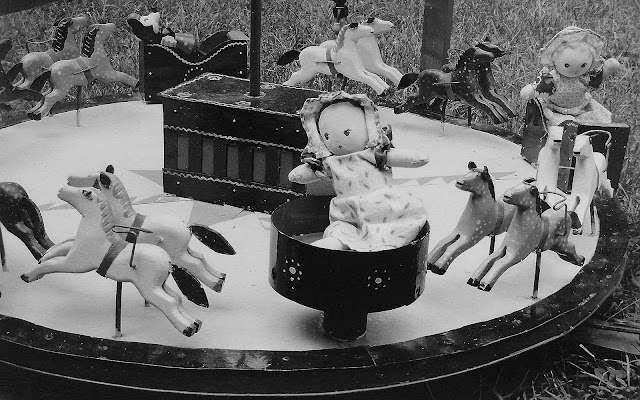 I was back in the Kerlan Collection, working on the paper trail of my mystery artist/obsession last week. I came across this loose photograph—it wasn't on the inventory and had nothing written on it. It stirred something in my memory, but I could not quite place it. I took a picture, saving the image for later scrutiny.

A few days later it came to me: I had seen something similar on my "World Tour" of 2011: 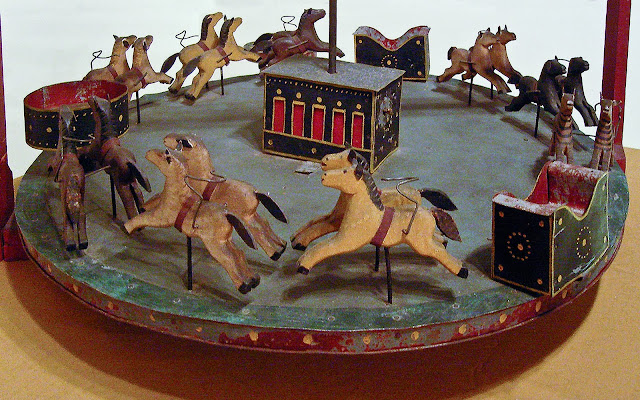 It had been hand carved and painted by an uncle of the artist, fashioned from scraps of wood and tin cans. The two carousels weren’t exactly the same, but there was no doubting their provenance. The artist had written about her uncles in her diary:


"Uncle Frank, how do you figure the prices on your work—is it by the hour for instance?" "No—no," he has a curious hesitating speech, "No—just—just whatever it is." This was not clear to me and I asked, "Do you mean whatever they ask," "No, whatever the price of it is!" and he pointed to a Sears and Roebuck catalogue. I gasped inwardly. He was charging what ever a similar object in the Sears Roebuck catalogue came to!

I think he should have charged more for his than the Sears catalogue.