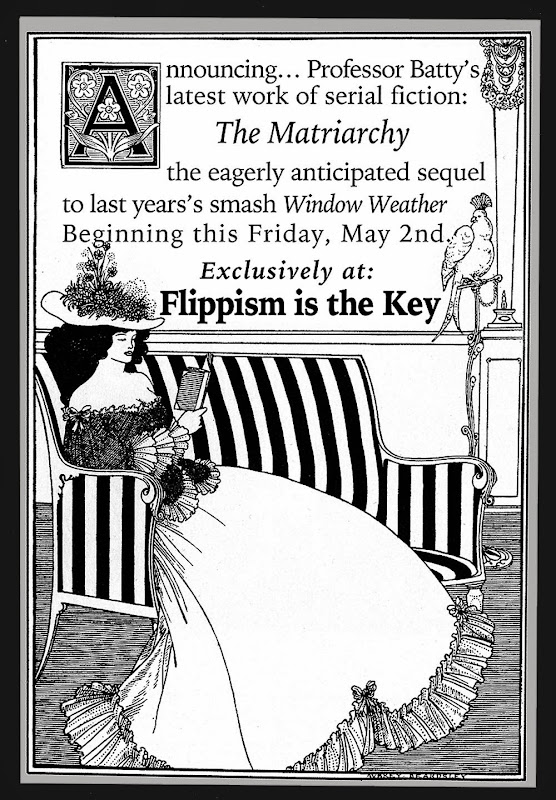 It’s been over a year since we last heard from Sean Carroll, intrepid data miner and unwitting pawn of international political intrigue. This new adventure will have a decidedly different tone.  I hope you will tune in each Friday for a new chapter.

As with the previous novel, the chapters will be indexed in the sidebar, under the word Fiction. 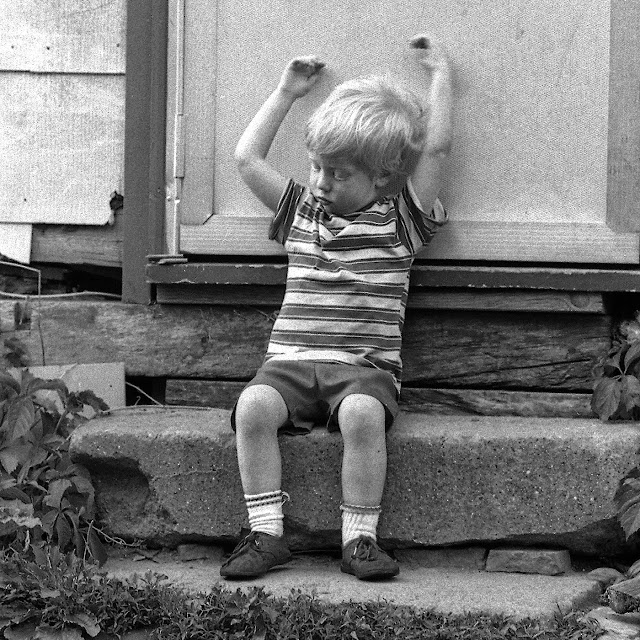 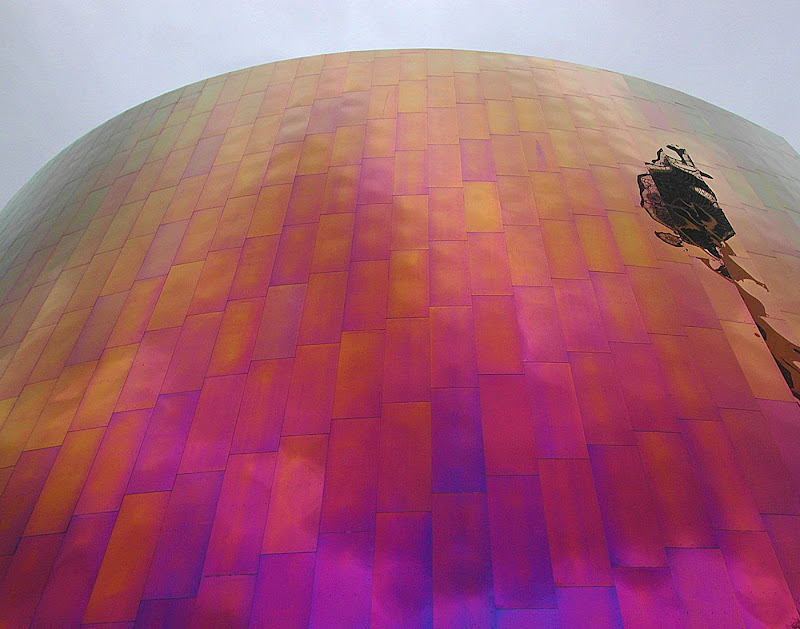 
Purple haze all in my brain
Lately things just don't seem the same
Acting funny, but I don't know why
Excuse me while I kiss the sky

Purple haze all around
Don't know if I'm coming up or down
Am I happy or in misery?
Whatever it is, that girl put a spell on me

Purple haze all in my eyes
Don't know if it's day or night
You got me blowing, blowing my mind
Is it tomorrow, or just the end of time?

The modern phenomena of reviewing every experience of daily life (Yelp, TripAdvisor, Yahoo, et al…) can lead to places that the curious would have never even been aware of much less visited. We were looking for a breakfast place on Washington's Olympic Peninsula, the two-hour difference in time (having  arrived the previous evening) would make brunch a more doable option. The reviews seemed to describe a wonderful place: great food, good atmosphere, in a charming town:

The town did possess a curious, if spartan, charm, although the roadhouse’s atmosphere of Modern Country music on a boom box was close to a vacuum. The food was, well, food. Lots of Agent Cooperesque coffee, however: 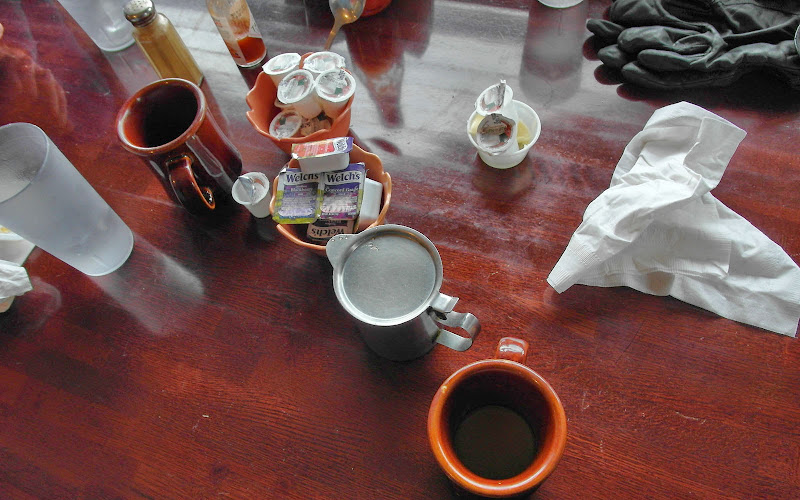 Almost everything in Washington State seems to have an attached brewpub, and this place was no exception: 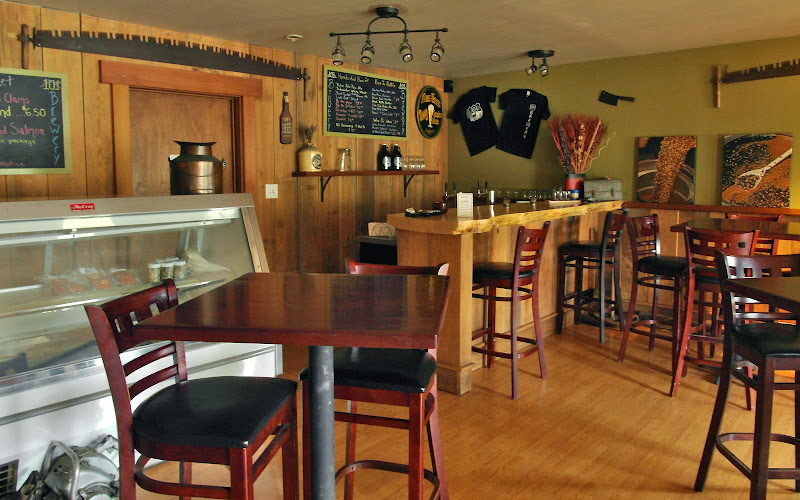 The decor was definitely unique: 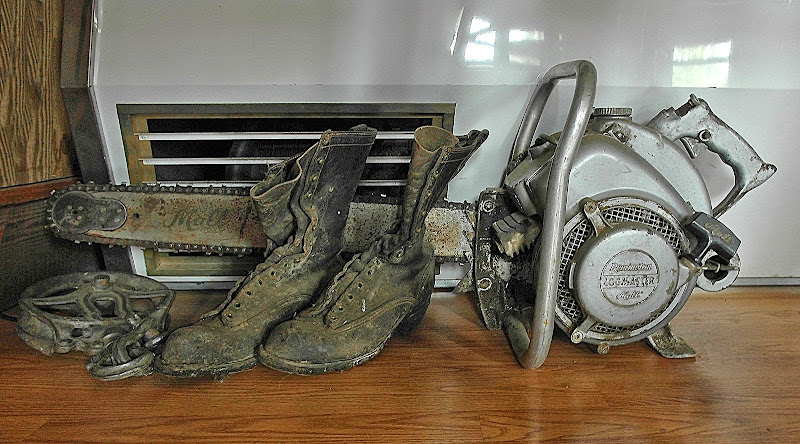 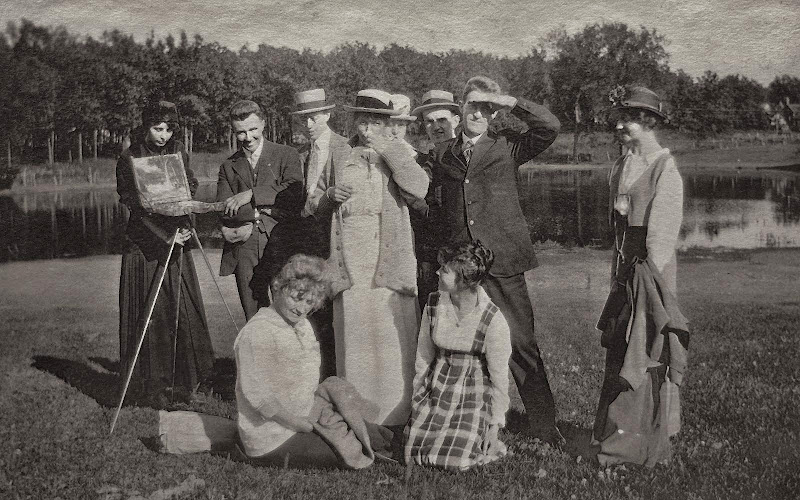 By the time this picture was taken, war had already been declared by the United States. The sun was still shining here, although several of the men in this picture would soon find themselves overseas. Adolph Dehn (standing next to the easel) would be sent to prison as a conscientious objector. His girlfriend, Wanda Gág (in plaid dress), would soon go to New York City to start her career in art.  The fate of others is unknown to me, but the war would end quickly, as wars tended to do in those days.

Face at the Window 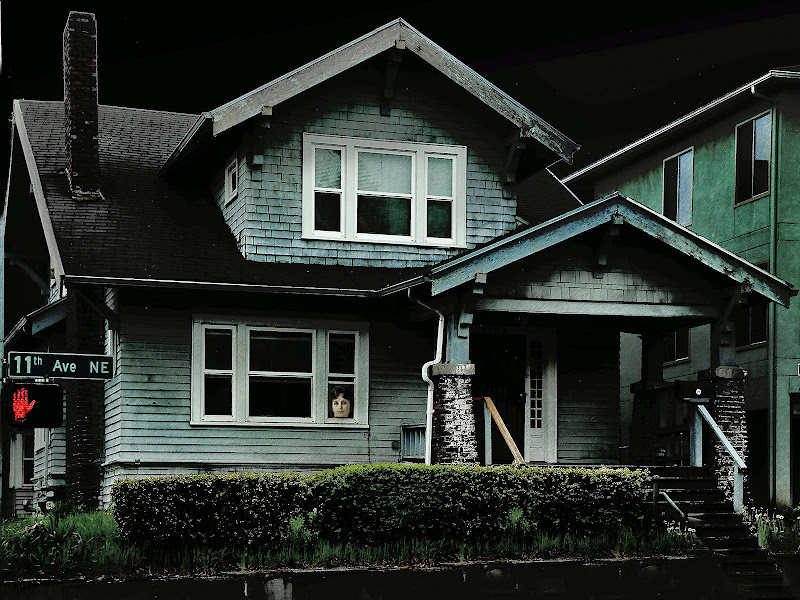 It was too early to go to bed, so we decided to take a little stroll in the neighborhood around the hotel. The glittering glass in the street, reflecting from broken car windows (there were several within a three-block radius) gave the scene an incongruous sense of gaiety. As we strolled along I couldn't help but feel that we were being watched.

I was not mistaken.

A woman’s head, staring out an open window in a bungalow on the corner. Expressionless, unblinking, but not without some motion. Her eyes moved as they followed our progress, as if she was a painting in a creepy mansion in an old horror movie. For a split second I was mesmerized. What was that advice they would always give in those films, when dealing with a potential psychotic killer?

DON’T LOOK INTO THEIR EYES!

Finally, I managed to avert my eyes; fortunately she didn’t come tearing out of the house brandishing a butcher knife.

If you meet the Buddha on the Road… 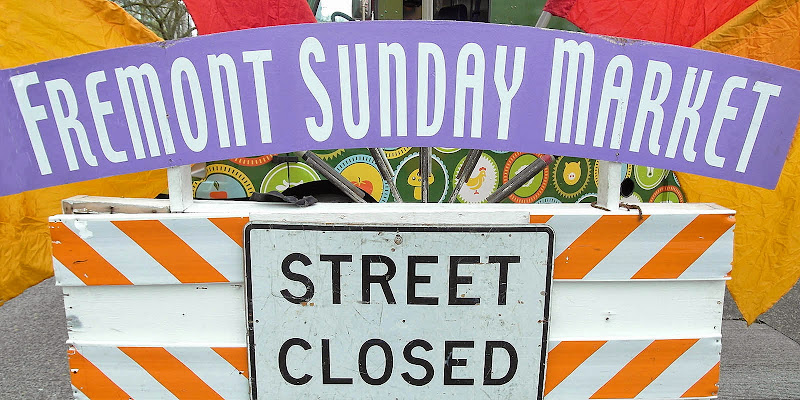 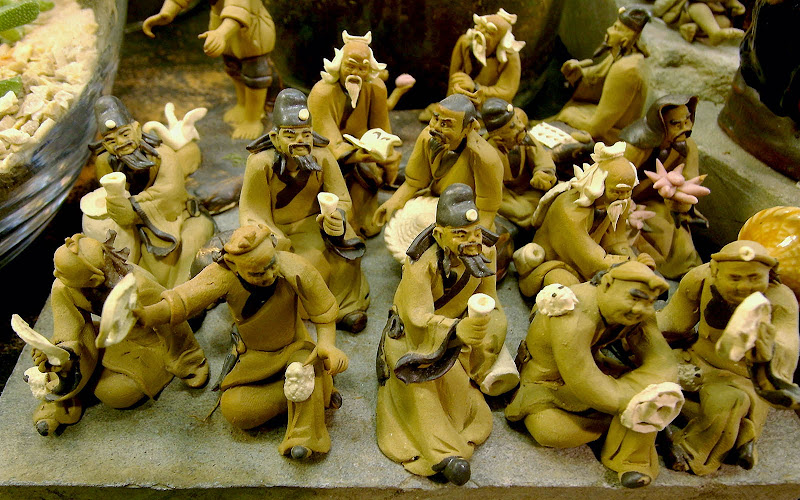 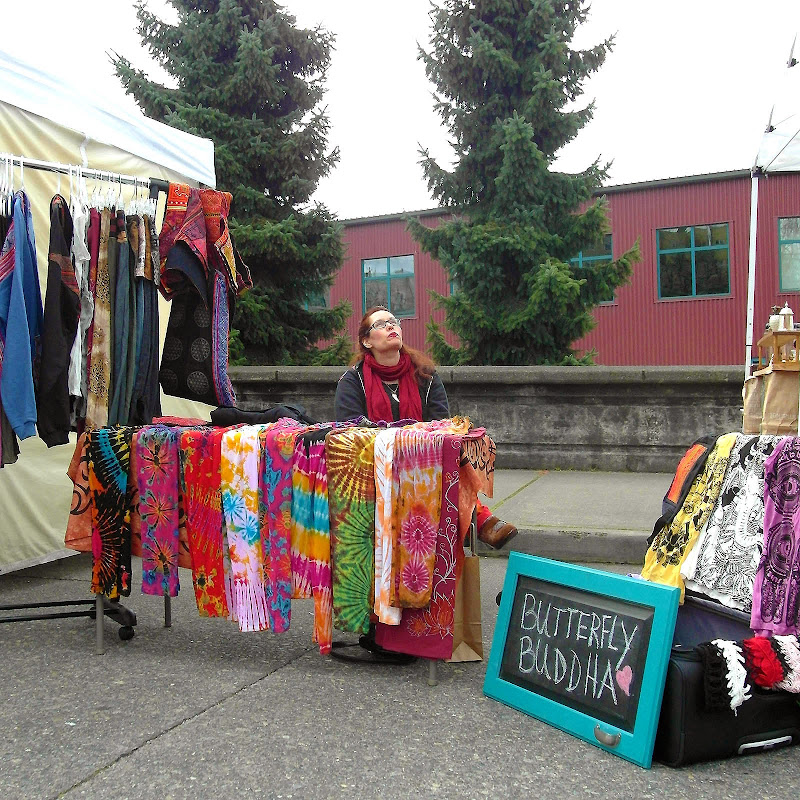 Whistling Vivaldi on the Quad 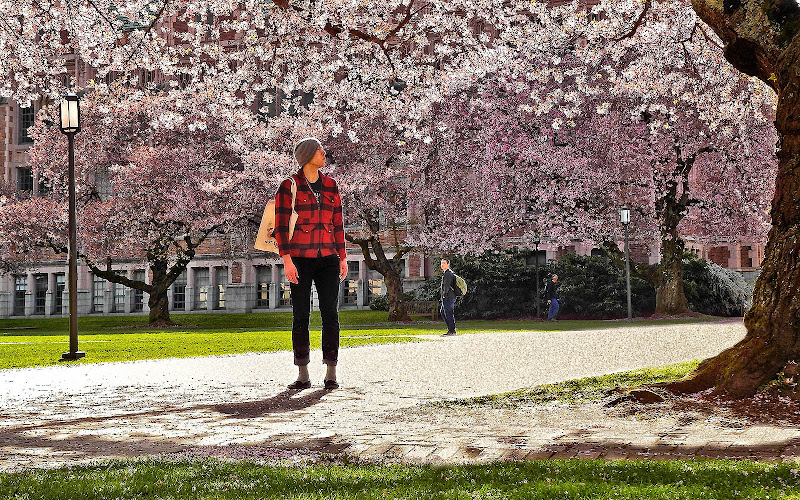 This delightful/annoying chap was making a video of his whistling performances. He would set up his camera at the base of a tree, whistle several bars, then stop and repeat the process from a different position. He may have even been doing parts (to be edited together later?) His whistling was brilliant—unless you were trying to think—but only the most curmudgeonly cynic would fail to be charmed by this glorious music on such a beautiful day.

This absorbing documentary about the secretive street photographer/nanny Vivian Maier has finally reached the screens. I first discovered her work three years ago, this documentary answered most of my questions about Vivian (Miss Maier to her charges) the person, but this film left me wanting more of her photographs.

Vivian was a hoarder. Were these negatives the way for Vivian to capture the world around her, and if so, why did she never share these? There are hints of Vivian’s darker side here, her slide into old age wasn’t pretty, it was obvious that she had some serious mental health issues. The documentary is very well done, respectful of the people interviewed and filled with home movies and even sound clips from Vivian herself. The technical section was fascinating to me (I used to do a lot of this kind of work) but might not be of interest to the casual viewer.  I’d love to see a full-blown exhibition of her best work, but that might be several years off, many of the Chicago rolls have yet to be processed. While most of those images we did see in the film have been previously shown on John Maloof’s websites, it was still a thrill to see them on the big screen in HD.

One of the best documentaries I’ve ever seen, well worth your attention even if you aren’t a photo buff.

For a look at Vivian that is more focused on her photographic development, this Chicago Tonight feature offers clues as to what inspired her to take up fine art photography.

More on the Emerald City 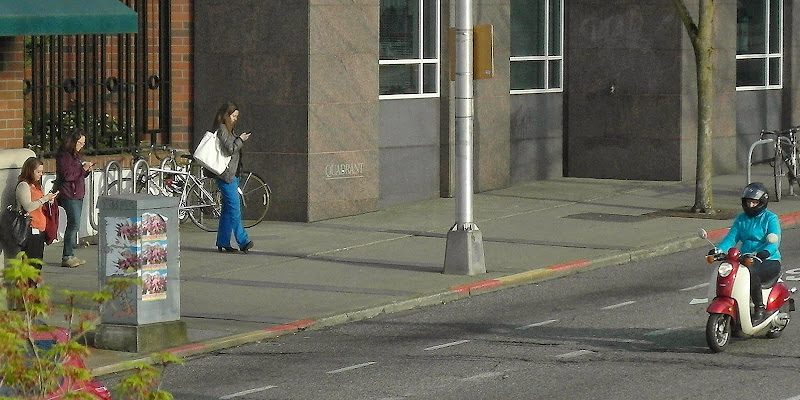 The first thing I noticed then was the vitality of the city and its citizens. Maybe it was all the coffee? Subsequent trips reinforced this—the population density and activity gave me the feeling of living in an anthill. This time, however, something seemed different. The noise level certainly hadn’t abated; the cacophony in the city center (buskers, performance spaces, sonic art installations, sea planes, traffic) was almost too much to bear. The change I sensed was in the people. It seemed as if more and more of the massed throngs had that same flat affect of the hard-core digerati—too much time spent hunched over a screen, nervously scrolling, with a corresponding loss of physical vigor. The same things I’ve noticed in myself. When I see a campus full of young people dimly grazing their devices I wonder what they’ll look like when they are as old as I am.

One of the things I wanted to accomplish when I first started this internet adventure ten years ago was to become as much as an original content provider as a content consumer.  I can see that balance is now starting to tip in the wrong direction. The Seattle trip highlighted these concerns.  I was much more engaged there (although it helped that the weather was gorgeous) that I had been in months at home. I took more pictures in six days than in the previous six months.

My next serial novel (The Sequel!) is beginning to take shape, albeit slowly, hindered not so much as by writer’s block, but by frivolous diversions (i.e., most of the non-literati links on my sidebar) as well the arrival of an iPad in the house which has to be the most insidious time-waster ever invented (it isn’t mine, thank goodness!).  It seems that it will always be a struggle for me to be fully engaged in the NOW. The artist’s dilemma, I suppose. 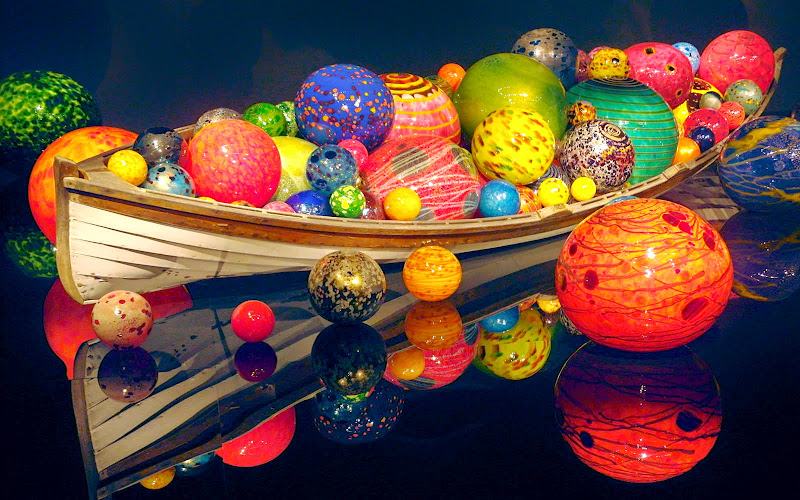 This controversial space is located right next to the famed Space Needle, a museum devoted to the works of Dale Chihuly, pioneering glass artist. Showy to a fault, Chihuly's glasswork (as well as some of his eclectic collections: accordions, vintage radios, Native American baskets) created a viral genre infecting gift shops around the world. The fishing boat (above) filled with stylized net floats illustrates the dichotomy of his pieces. Pretty—but for me somehow lacking in emotional resonance. 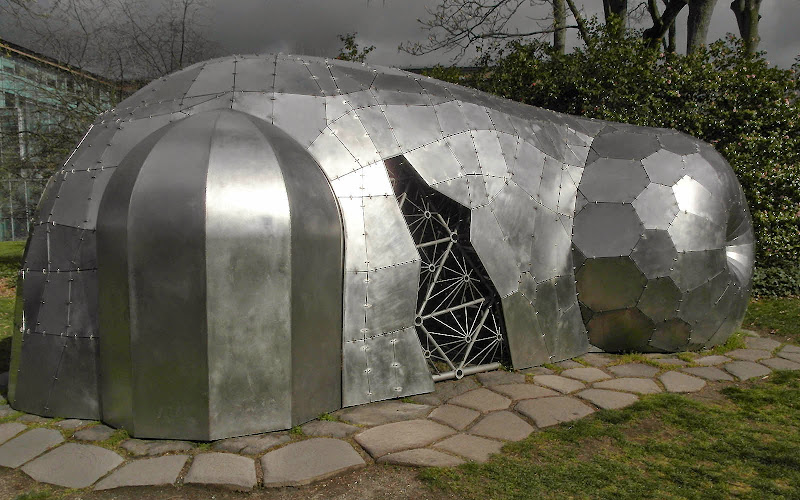 I couldn't find anything on this strange "Mini-Gehry" located near the William H. Gates School of Law when I was there but an internet search revealed it to be an elaborate in-joke spoofing two other campus buildings. 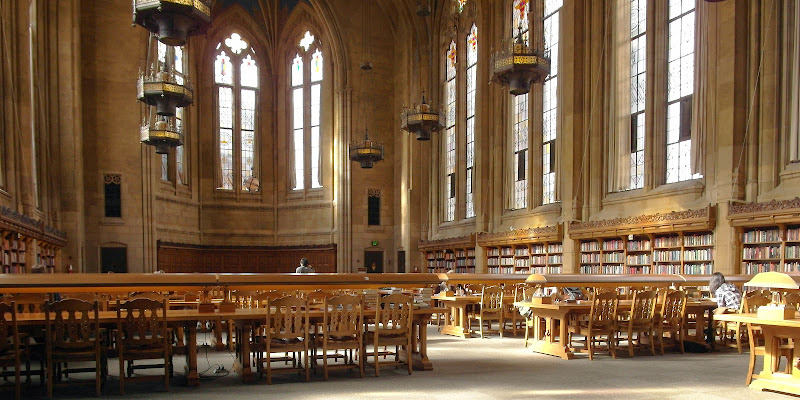 This “quiet study room” is also a browsers paradise. A library filled with a wildly diverse collection of books which can only be read in the room—none are available for checkout.

The Gothic look of the building belies its age (it opened in 1926). 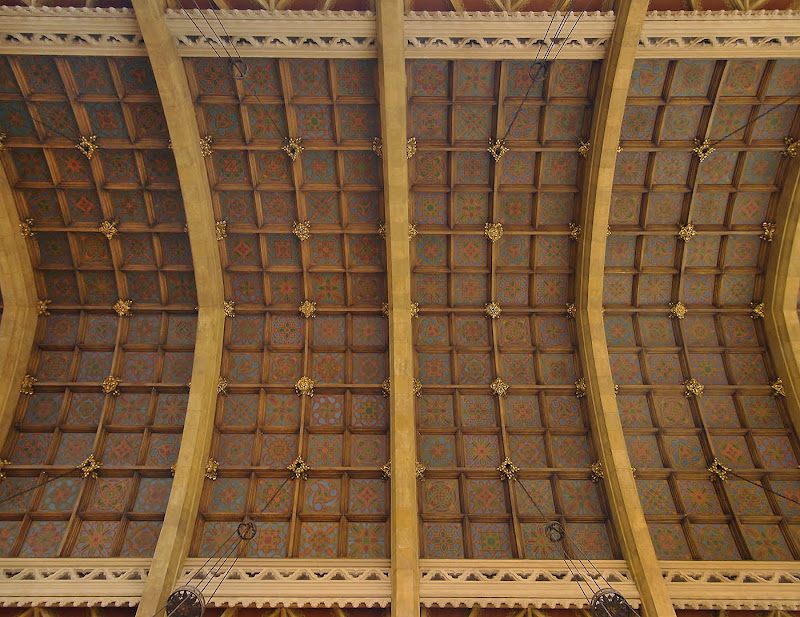 Another visually ambiguous image from the Seattle trip. 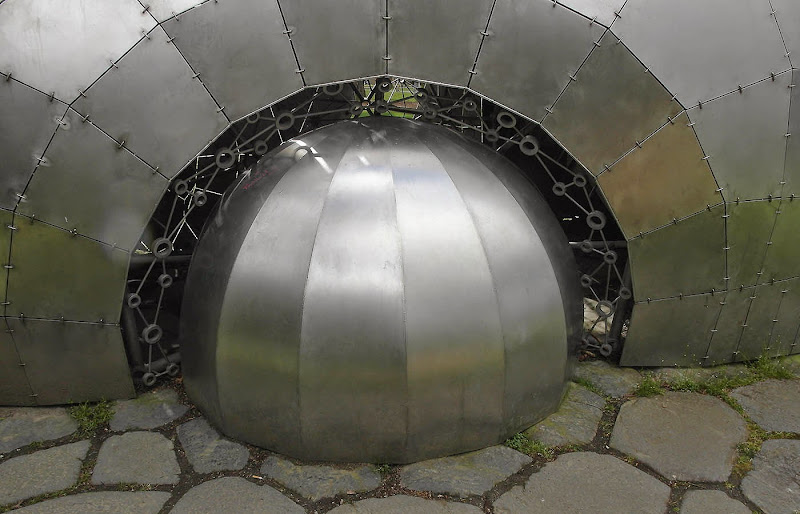 More ambiguity from the Professor's recent trip to Seattle.

I'm back from Seattle; a successful trip; an odd abundance of abstract imagery.

A few of the more perplexing ones will be featured in the next few days.

The above is a straight photo, no manipulation.

Any guesses as to what or where?

We won't be going this far into the wilderness…

… art is everywhere you look… 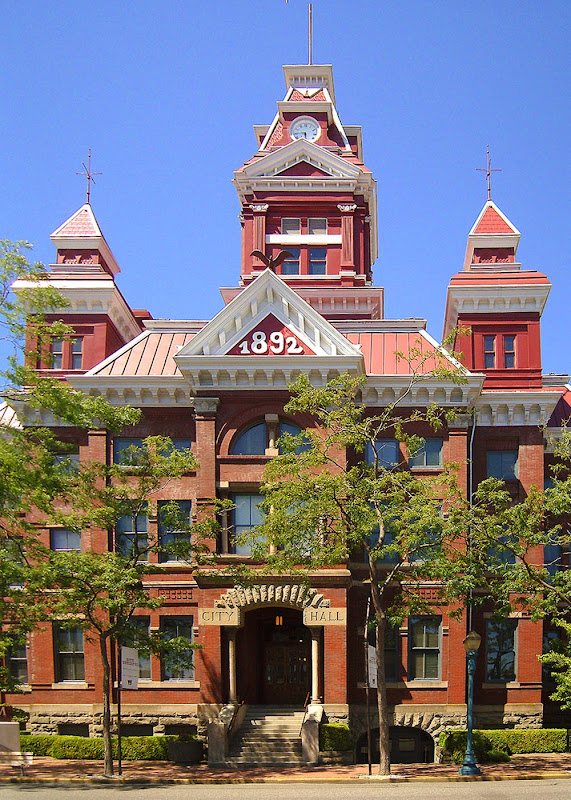 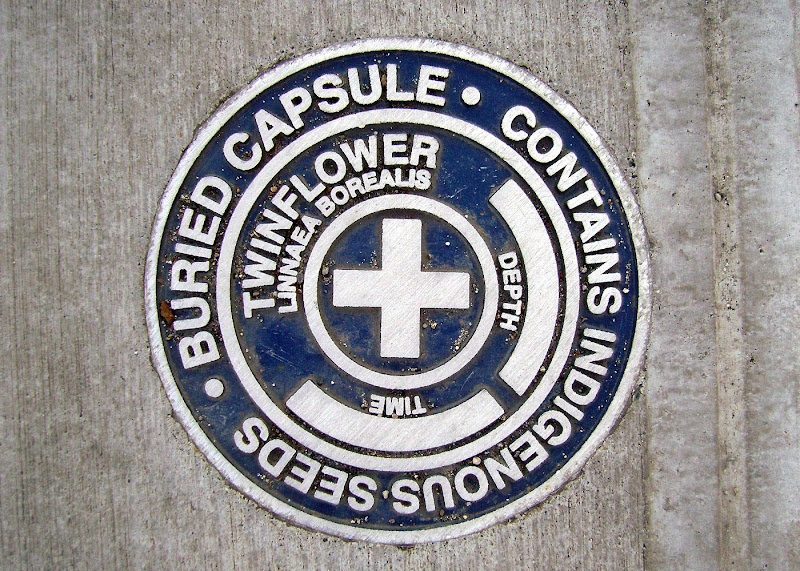 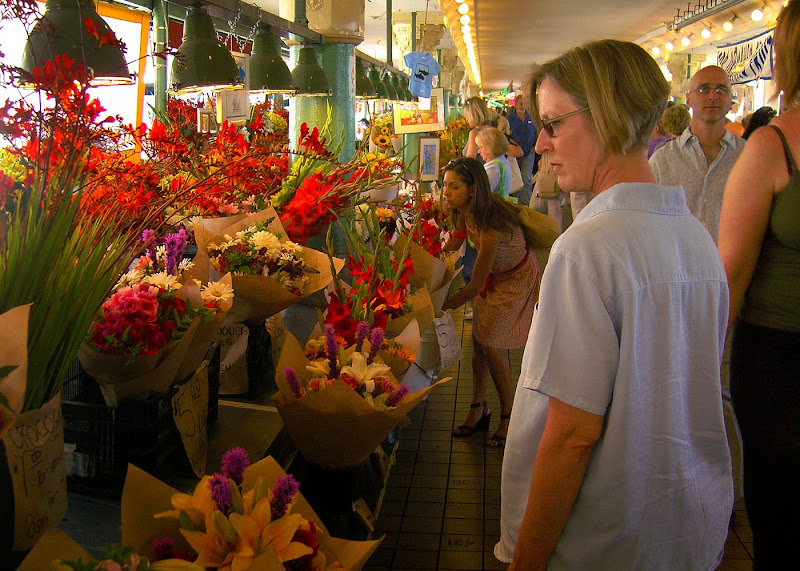 … and a bit more colorful… 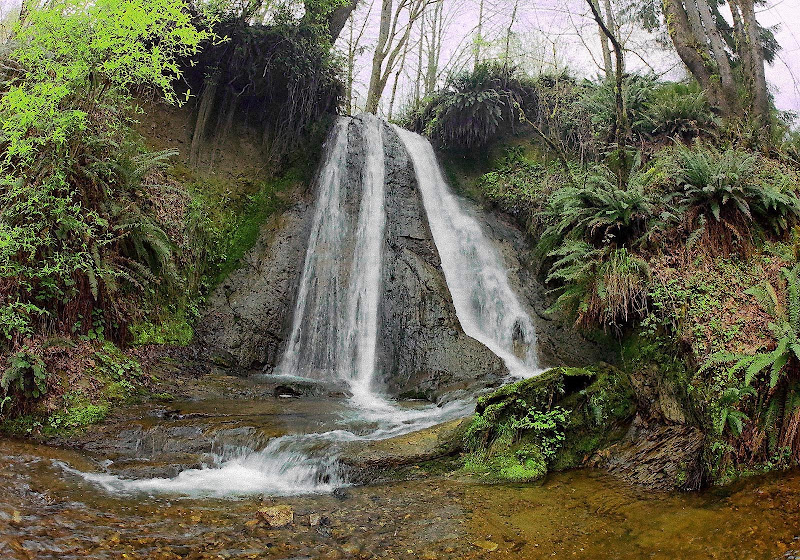 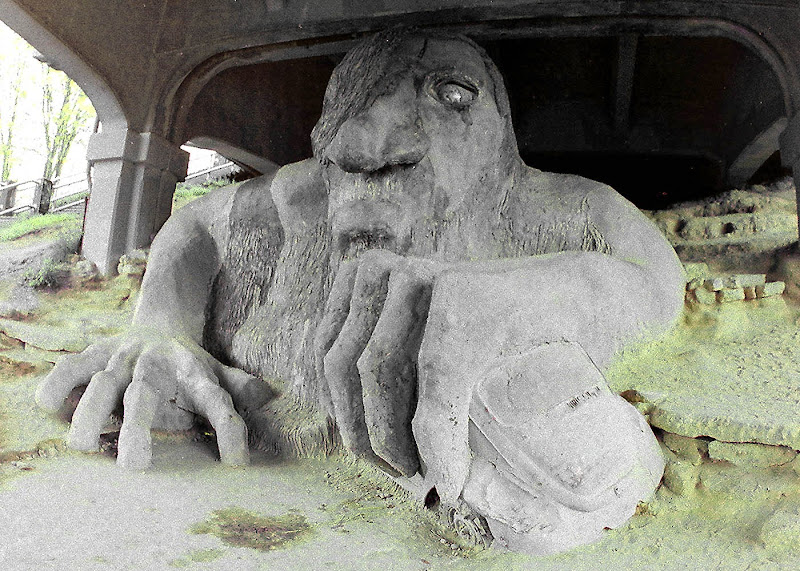 The Weaver and I are off to the wilds of the Pacific Northwest.

While we are away I'll be posting daily images from one of our past trips to Washington State.

I’ll leave my intimidating friend, pictured above, to guard FITK in our absence.

Leaving on a Jet Plane… 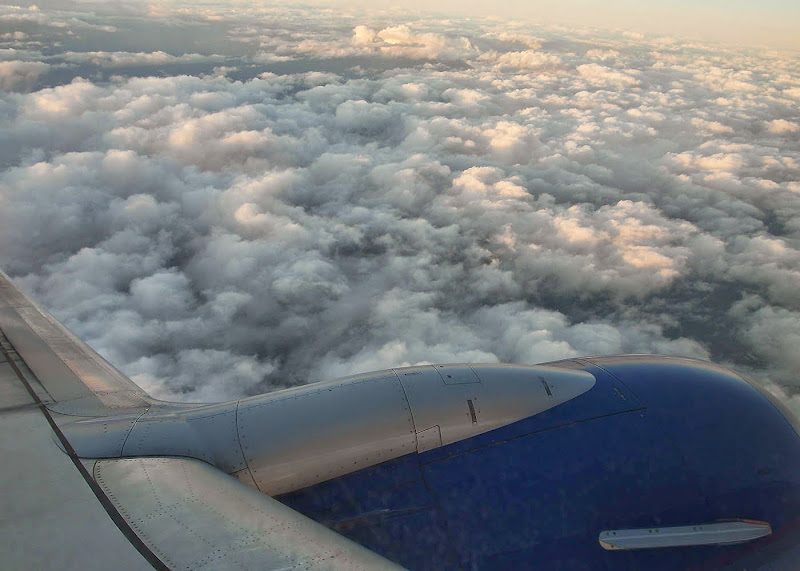