Take Me to the River

This is chapter 30 of The Matriarchy, a serial fiction novel on FITK 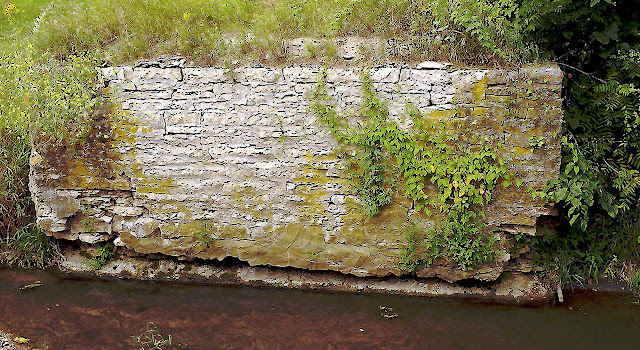 “The place where the bridge used to be is just ahead.”

Sean led Mary through the overgrown road, reaching the creek in a couple of minutes. The bridge deck had been completely removed but its pilings were still in place.

“Looks like we’ll have to get wet,” said Mary, as she looked at the pictures on her phone, “Emily’s drawing was marked right in the center of the old bridge support on the other side.”

They climbed down the bank and hitching up their pants, removed their shoes and socks. Mary, in her state of heightened awareness, gasped with delight when she stepped into the cold water.

“Not as spooky as the Ice Cave… ” she said, walking across the stream, “… but almost as cold. This should be the spot.”

Mary explored the limestone blocks with her fingertips.

“Do you feel anything?” said Sean.

“No, nothing special. Maybe the portal was disturbed when the bridge… Woo! That’s it. Right here,” Mary began to tremble, “I… ”

Mary had placed both of her hands on a stone about halfway up the wall and had closed her eyes. Sean, having seen similar behavior in the ice cave, watched Mary carefully but didn’t interfere. She began breathing deeply and rapidly with her head down, her body rocking back and forth. After a few minutes of this, she moaned softly and lowered her hands.

“Are you back?” asked Sean, “What happened?”

The couple returned to the river bank, and Sean got some water from the picnic basket. Mary drank deeply then sat quietly for several minutes. Finally, she spoke:

“That was a deeper one. A lot of raw information,” Mary put the bottle of water back in the basket,  “Let me sit by myself for a while.”

After he had walked a bit, Sean glanced back at Mary: she was still sitting, with her eyes closed, just as he had left her.  Sean enjoyed walking in the cold water of the creek. In the center of the stream was a long bar of silt. The mud, squishing between his toes, gave Sean a slight erogenous thrill.  He thought to himself “Hedonist.” The water roiled about the occasional boulders, creating small potholes around them. Sean watched with amusement as the baby bullheads frolicked in these shady pools. In the past, Sean had seen trout here, but today the only other fish he saw were a few black minnows nibbling at his toes.  He continued on up the stream for several hundred yards until his way was blocked by a fallen tree. By this time his feet were getting quite cold: it was still only early May, the full brunt of summer wouldn’t arrive for several weeks. He turned around and walked back to where he had left Mary.

As he rounded the bend Sean saw Mary in what appeared to be an intense conversation with two deer—a doe and her fawn. He stopped and stood still, not wanting to break whatever rapport Mary possessed with the creatures. Mary nodded at the doe. The doe nervously reciprocated, acting as if she was afraid of being seen. The fawn stood by her mother, shyly looking at Mary.  When Mary placed her palms together in front of her and clapped once, the deer took off down the stream bed. Sean then approached her.

“Hmpf.  I’ve figured out what this portal does,” said Mary, “Now I understand what those coyotes in Montana were trying to say. This is one ‘power’ that just might save our necks some day.”

“No, it’s all raw animal instinct,” Mary said, “The doe was anxious about the weather while the fawn was in a state of grace. Beautiful, simply beautiful. At any rate, we’d better get back to the house, there’s a storm brewing up over on the other side of the hollow.”

“Are you sure? It’s a beautiful day.”

“Trust me. Instinct trumps observation,” said Mary, “We can eat as we walk.”

Thunder rumbled over the hills and in a matter of minutes the northwestern sky started filling with clouds. By the time the couple had reached the house, it had begun to pour.


Back in Seattle, Sally O’Donnell shut down her computer. She closed her eyes and fought back the urge to vomit.  She had just realized just how much danger that Sean and Mary were in; she would have to make Sean aware of the contents of Roger Ramsen’s computer files. What she didn’t know was how to discreetly contact him. Then she remembered someone who might: Molly Berenson, Sean’s old lover.