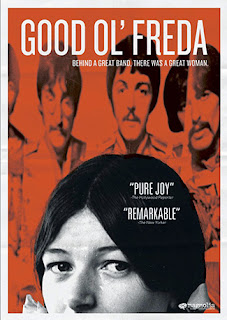 Of all the movies I’ve seen about The Beatles (collectively and individually), Good Ol’ Freda is by far the most honest and human. Freda Kelly was a seventeen-year-old woman working as a typist when she, through an unlikely chain of events, became the groups” secretary and head of the Official Beatles Fan Club, a position she held longer than The Beatles were a band. Motherless, and with a stern and much older father, Freda soon became part of the “Beatles family”, with very close relationships to the Starkeys (“Richie's” mum and dad), the Harrisons, as well as Paul’s father and stepmother. Her no-nonsense style and absolute commitment to The Beatles, both professionally and privately, is a welcome respite from all those sordid show-biz insider tell-all stories. It also gives glimpses of The Beatles when they weren’t in the limelight and of the unique relationships she had with each of them. It is filled with many never before seen photos and has a great soundtrack.

She had never cashed in on her fame (she was still working full time when she was seventy) and most of her memorabilia had been donated to charity auctions years ago. She still retained many of her most personal items; the sequence in which she digs them out of the attic is one of the most touching parts of the movie.

Intensely private (her own daughter said that 95% of the film was news to her), she came to the realization that most of the people involved in the story were already gone, and it was a case of "now or never." It was directed by Ryan White, the son of a family friend who grew up knowing her, but had no idea of her role in the Beatles story. He has created an extremely personal and unassuming film; in an interview ‘extra’ it is obvious how much affection and respect he has for Freda. Available at the link and on Netflix.

I saw it, too. It was real and true and honest. It was totally unlike anything else about the Beatles! Wonderful film. I love Freda.

That looks terrific! I wonder where I can get/see it?

I got absorbed in the trailer and missed the link. Ooops!