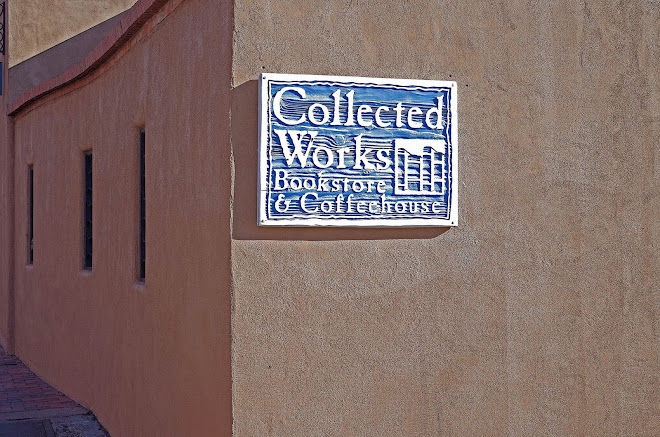 You never know who you might encounter in Old Santa Fe.

The Weaver and I found this excellent bookstore a couple of blocks from The Plaza. A plaque on the outside wall stated that this was the site of the jail which once held Billy the Kid. In addition to this provenance the store features a wide variety of quality books, a coffee bar, and a stage/seating area. When we first stopped in on Sunday there was a spirited discussion about water rights going on. I made a note to return and later discovered that the author James Penner was going to appear the coming Thursday to speak about his book, Timothy Leary: The Harvard Years. Arriving at the appointed time, we joined a couple of dozen gray hairs and a smattering of younger people who were filtering in. A wag sitting in the back whistled the tune from The Moody Blues song Timothy Leary's Dead from time to time.  I used to own a copy of Psychedelic Review which had published many of Leary's early papers, so my interest was already piqued.

At the appointed time, Professor Penner was introduced by Joanna Harcourt-Smith, who, I later found out, was not only an author herself, but was Leary's partner and the mother of one of his children. No wonder Penner seemed a little nervous during his presentation. Penner had made considerable efforts in tracking down almost all of Leary's published work and had incorporated most of it, along with a commentary, into this book. The story of Leary and Richard Alpert being fired from Harvard's faculty was also touched upon, including Andrew Weil's little-known and somewhat shady role in the affair.

Penner explained that due to political and media backlash the original papers had long been out of print and many had been removed from university libraries—they were virtually unknown to new generations. Afterwards he took a Q&A. The questions were apt and focused; the crowd was obviously well versed in Leary and his psychedelic message. After about a half-dozen questions, the oldest person in the audience was given his turn to speak.  The man had been at Harvard during the time in question, and knew both Leary and Alpert as well as the pioneering ethnobotanist Richard Evans Schultes. The old man described how closely integrated the three men were with other disciplines in the college, how it was an exciting time of discovery and innovation: not just in Leary's and Schultes' fields. He said that the story of how all these people, as well as other luminaries such as William S. Burroughs, remained close throughout their lives was still little known.

As he continued to lucidly speak I could almost hear the sound of jaws dropping to the floor. It was an intensely "mind-expanding" experience for every one involved. I could almost visualize the trailer for A Major Motion Picture which could be made from his story. Penner was obviously moved in coming face to face with two original sources.

Wow! A trip down psychedelic memory lane! I'll bet it was fascinating!