This is chapter 43 of The Matriarchy, a serial fiction novel on FITK 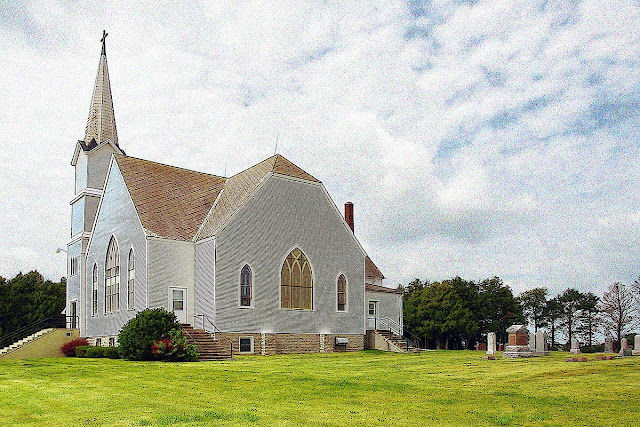 In the morning, Mary was up, dressed, and out of the house before Sean awoke. She went to the spot in the meadow where she had seen the apparition of Emily. After reading the Book of Power, she could sense the center of the ‘spot’ quite easily; all of her experiences had begun to merge into a coherent whole. They didn’t make ‘sense’ in the strict sense of the word, but Mary felt much more comfortable in exploring the aspects of her new-found powers. She stepped into the locus and immediately felt the same coldness which had previously happened when she had been inhabited by Emily. This time, however, Emily was ‘talking’ to Mary, not through her.

"Welcome to the Matriarchy," thought Emily, “I see that you have unlocked the secrets of the Book of Power. You have proven to be most receptive. I am able to communicate with you, but only for a limited time.”

“I am grateful for your assistance,” thought Mary, “There is so much to know.”

“And time is short. Listen now, I will tell you how the situation we now find ourselves in has come to pass,” thought Emily, who then began to relate the story:

“When I was a child, I learned the Secrets of the Matriarchy from my grandmother. Seeing that I was receptive she instructed me, in secret, in all the powers as well as giving me the rings. She was the victim of a witch-hunt by the local minister, and was taken away to an asylum. I never saw her again. I kept these things to myself, and when I came of age I went to New York City, a place where my grandmother said I would find like-minded people and be able to live without the threat of persecution from the provincials in Iowa. I landed in Greenwich Village, and fell in with a group of struggling artists who would soon become successful. Although my artistic talents were great, I soon learned that cultivating the interests of rich men in power was far more lucrative. The Regelind tobacco dynasty had grown enormously in the twenties, and I became the mistress of its founder, John Regelind, Sr., and was ultimately impregnated by him. A scandal would be bad for his marriage and reputation so, by mutual consent, I returned to Decorah and gave birth to Tina. After a suitable time, I left her with Henry and Alice, who were childless, and returned to New York City and took up with John again, right where we had left off.

After the 1929 crash, Regelind Tobacco was only slightly affected; people wouldn’t give up their smokes. It was one of the few industries that actually grew during the depression. When World War II broke out, John Regelind was consumed with government work, but by then I had became consumed with his son, John Junior, who was in the military, stationed in Virginia; we could discreetly continue our affair. Again I became pregnant and again I returned to Iowa, where I gave birth to Sean’s mother, Marylin. While I was there, I tutored Edwin Duddle. When Tina found out about our intimacy, I went back to New York. John Sr. had died of a heart attack, and John Jr. was now the head of the company. Our relationship was strained. He said he wanted to make up with me and brought me to his home in Virginia. On this pretext, he lured me into a strange round building in a remote area of the estate. When I was inside, several men grabbed me. I used the power of suspended animation—you’ve read about it in the book—and I was immobilized. I have been trapped in this state since then; never aging, but immune from all harm. The group of men call themselves ‘The Brotherhood’ and through the years have used their power and influence to oppress the masses and destroy any manifestation of The Matriarchy.

Although my physical being is in a state of suspended animation, it is possible for me to communicate with ‘sensitives.’ Your awareness of the Matriarchy was triggered when you became pregnant. There are other ‘sensitives’ throughout the world. Their time is coming soon, and you will be their prophet. Sean’s children will be leaders of the new generation who will release the world from the dark grip of The Brotherhood.

“How will I know what paths I should take?” thought Mary.

“Make the ‘sensitives’ aware of their powers,” thought Emily, “Protect Sean and his children from harm. Find me and release me from bondage, for that will begin the destruction of The Brotherhood.”

“Sean and I will have more children?” thought Mary.

“You and Sean will have a daughter. Sean’s son has already been born, in the tribe of Auður the deep.”

Mary began to feel the coldness lift from her shoulders; she knew her time with Emily was coming to an end.

“When will I speak with you again?” thought Mary.

“At the time of my deliverance,” thought Emily, “When we share a naked kiss.”


When Sean woke up, sunlight was streaming into the bedroom. He walked over to the window and, looking out, saw Mary standing in the meadow with her head bowed. He watched her until she raised her head and began walking back to the farmhouse. By the time Sean was dressed he heard the kitchen screen door slam. Going down the stairs and into the kitchen, Mary and Tina were preparing breakfast.

“You were with Emily?” said Tina.

“She was here,” Mary said, “We had a conversation. She told me about what happened in New York: about her life, about The Matriarchy and The Brotherhood, and about Sean’s children.”

“Children, as in the plural?” asked Sean.

“The boy in Iceland is yours, Sean. And he’s part of this as well,” said Mary.

“Emily told me that her body is in a state of suspended animation. She is imprisoned in a ‘round building’ on the Regelind estate in Virginia,” said Mary.

“Yes. The Brotherhood is affiliated with it,” said Mary, “She told me who your father is, Tina, and who Marilyn’s father was.”

“Do I want to know?” Tina nervously asked, “This is all tied together, isn’t it?”

“John Sr. was your father, Tina. He was the one who wrote those love letters,” said Mary, “But John Jr. was your mother’s father, Sean. No wonder they didn’t want it to become known—you are both heirs to the Regelind fortune.”

“And, for that reason, my mother was killed. I suspect that she had found out and was threatening to expose the Regelinds. Is there a John the third?” said Sean.

“I wouldn’t be surprised if he is the current leader of The Brotherhood,” said Mary, ”All the secrets are going to be revealed. Emily has been waiting seventy years to tell them.”


After breakfast, Mary and Sean went into town to check in with developments in Seattle. Then Sean took Mary to visit the final power center. It was in a churchyard, not far from Tina’s place on a windswept hill. Adjoining it was a small cemetery dotted with gravestones. Most were new, but there were also a sprinkling of older ones as well. Mary found the ‘spot’ with little trouble. It was behind one of the larger monuments. She sat down in its shadow. Sean wandered among the rows, at a distance, keeping an eye on Mary.


Molly Berenson, in Seattle, hesitated a moment before phoning. She felt as if she was signing her own death warrant. She did press the ‘call’ button, however, and when Sally O’Donnell answered, she simply said:

“Yes. See you then,” said Molly. She hung up. And then she threw up.