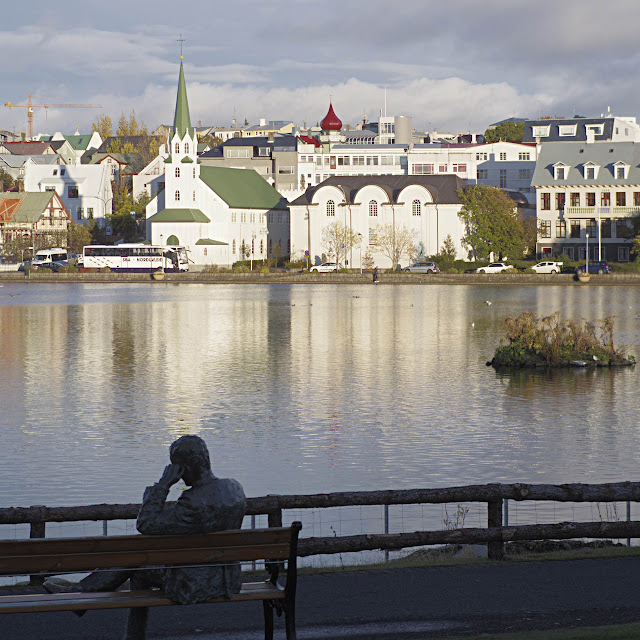 It would be disingenuous of me not to acknowledge the women who enriched my recent trip to Reykjavík. As it has always been, even from before the beginning of FITK, it seems that it is the women who have always made the biggest impression on me in my restless wanderings in the wilds of the 'blogosphere' (how quaint that term seems now), and in my real world sojourns as well.


M—, writer and erstwhile blogger, met me at her favorite local coffeehouse, we wasted no time in catching up. Not so much in listing our recent activities but, rather, where we were in the arc of our respective lives. She had experienced some stormy weather; it had tested her and caused her to do much soul-searching as well as no little amount of real anguish. Our conversation came to a peak in a moment of shared non-verbal emotion—only a second or two—when the gap between us seemed to disappear and our facades crumbled in the shared awareness of our humanity.

Y—, artist, musician, advocate. Resolute in the face of adversity, this survivor has never given up in her eight decades of striving for the expansion of consciousness and the greater good of humanity. Standing in a freezing drizzle, she addressed the faithful who, like her, had come to this windswept island in the bay to honor the legacy of her long since departed soul-mate.

?—, an accidental dinner companion, who had come to Iceland from Japan to see the auroras, geysers, and to steep herself in a foreign culture. Our words were few but our shared laughter and the brief flickers of connection were genuine. The restaurant's background music was Norah Jones—a fitting, if somewhat oblique, soundtrack to our current situation.


U—, with whom I shared water and philosophy. From Africa, via England, she had found a new home and a spouse in Iceland, as well as becoming assimilated into the culture. She enjoyed a close relationship with her new-found community. She spoke of overcoming 'the fear' which can isolate us and which brings us only misery. She radiated life, and as she interacted with the patrons of the pool they reciprocated the feeling.

And finally there was A—, my long-time Icelandic inspiration, who has transformed herself from a callow youth into a minor institution—as well as becoming an un-official "greeter"; the first Icelander many people interact with. She has given and given for so long, to so many people around the world, that she has outgrown me—outgrown in the best sense of the word. I only had a few seconds to say hello and goodbye.

? and U are the only two I cannot place. The women of Iceland and the ones drawn to it are amazing in their scope and breadth. I may not feel worthy, yet I can't help but be drawn to such a place and such people.

"shared awareness of humanity"...a perfect way to put it

Jono ~ ? was a fellow tourist, Ufuoma was a force of nature.