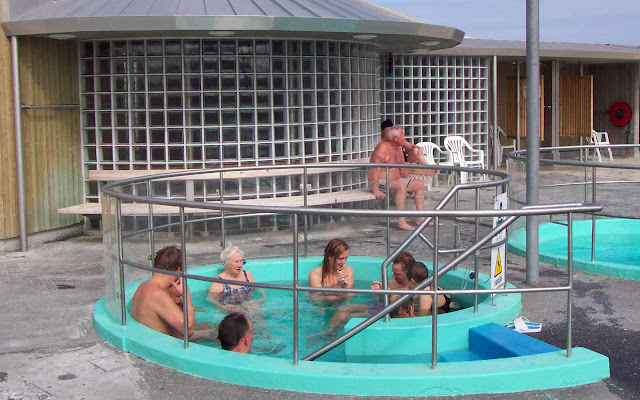 When I've been in Reykjavík the one place (outside of my apartment) where I've spent the most time is the 'hot pot' pictured above. This afternoon (Wednesday) I spent close to three hours there—enjoying the sun, the 38-40° C. (100-104° F) warm water as well as interacting with an interesting mix of people from various backgrounds. The conversation was lively, the first half-hour was dominated by an older gentleman whose non-stop banter kept the pool laughing. It was all Icelandic, I could understand the laughter and when he referenced numerous vacation sites (Costa del Sol, Sardinia, Crete, San Francisco) but otherwise I could understand little. When he left a woman took up the slack for another half-hour, also in Icelandic. The crowd turned over, and several of the new arrivals started talking to me (in English) about a wide variety of subjects: the destruction of the Reykjavík city center, Vikings in the new world, Snorri Sturluson, the Kensington Rune Stone (they brought it up!), Shakespeare's visit to Iceland (?!), the spread of Icelandic pop culture, and music education in Iceland (one of the men in the pool had been a music teacher of the Ákadóttir twins!!)

As the crowd thinned out, two men (a nephew and uncle) remained and the talk turned to Halldór Laxness. We talked about the problems of translation, various books, and the subtle ironies in Laxness' writing. Then it was only the nephew who remained, he spoke to me about his life in Denmark, how he wanted to return to Iceland permanently, and about the water. "God made the cold water, and the Devil made the hot water, and the mixing of them is what makes Iceland such a special place." He also introduced me to the pleasure/torture of the 'cold pot'—with water in the 8-10° C. range (45-50° F.) and the importance of drinking lots of water when in the hot pots.

I reluctantly left the pool to get ready for an evening at Harpa.

This most agreeable concert gave nourishment to both mind and spirit. Billed as The Aristókrasía Project, it was "an other-worldy musical journey through a utopian world of space travel." Electronic, strings and percussion combined with video from the space station and, in the final segment, Yuri Gagarin's first orbit of the earth. Úlfur's vocoded vocalizations added a melancholy warmth to the piece.

FINAL UPDATE: On my way back home I took this picture: 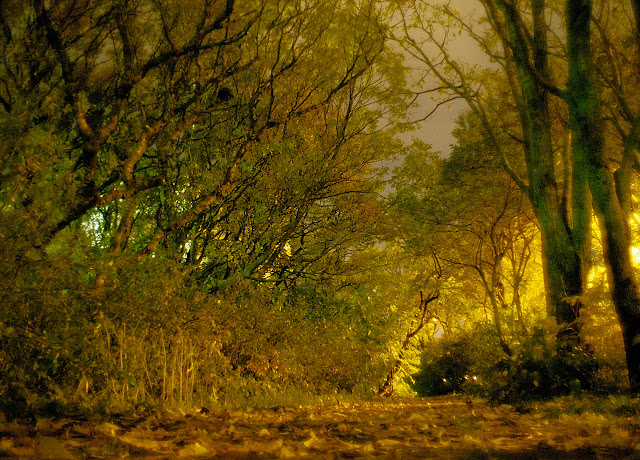 Now do you believe in the "hidden folk"?

It's a wonder you didn't turn into a prune. You will be seeing my cousin's wife's (Ólöf Eld­járn) nephew at Harpa. They are all artists and musicians in that family it seems. Have fun!