This is chapter 75 of The Matriarchy, a serial fiction novel on FITK 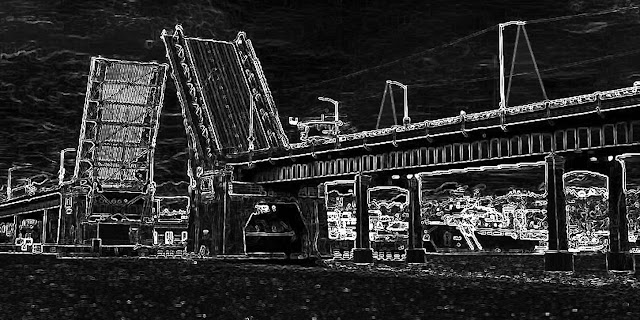 Sean and Mary were stuck in traffic at the Ballard bridge, which had just opened to allow a ship to pass. Sean’s phone rang and Mary picked up.

“It’s Tina,” said Mary, “Do you want to answer answer, or wait until we get home?”

“Talk to her, we’ll be stuck here for a while,” said Sean, “You were closer to Emily than I was.”

“I felt it. It feels as if part of me died,” said Tina, “What happened? Was it difficult for her?”

“Emily told us that she was expecting a Norn, who would be her spirit guide to the other world. We were at a park,” Mary continued, “Emily said she was cold, and then she said it was time. She went off with a strange woman, and told us not to follow her. They went down to the ocean and were gone. I could feel her leave the world as well.”

“Are you two alright?”

“It should be a sad time,” said Mary. “But Emily embraced it. I’m glad we had the chance to be with her, if only for a couple of months. We’re doing O.K. Would you like to talk with Sean?”

“We’re stuck at a lift bridge,” said Sean, “We won’t be going anywhere for a while. Tell me what you know.”

“Well, I was sitting here, with Edwin, watching a movie. I felt a chill, and a darkness passed over my eyes. I knew she was gone. Do you think that her body will turn up?”

“It just seems so… incomplete.”

“She was a person out of time. She left us a legacy, though.”

“What do you mean?” asked Tina.

“The Regelind estate, the inheritance we were talking about yesterday?” asked Sean.

“There are some paintings there, paintings by Emily, thirty, or more,” said Sean, “She told me that Regelind Senior had bought them and was going to put them in an exhibition. It never happened.  Emily thought they were her best work. We can make that exhibition happen someday. That will be her memorial.”

“Do you think they’re any good, would people still want to see works by an unknown artist, hidden for all these years?” Tina asked, “Do you think anyone cares?”

“There is evidently a fair amount of documentation with them, as well as letters from  prominent art dealers in the thirties. I think that with the story of her life and her disappearance they’ll create a sensation. We won’t go into the story of her resurrection—who would believe it?”

“How is Mary doing, with the baby?” asked Tina.

“Good, I’ll let you talk to her. The traffic is moving again, I’ve got to start driving,” said Sean, as he handed the phone back to Mary.

“About six or seven weeks. At least, that’s what they said at the clinic,” Mary said, “It seems like I’ve been pregnant for years.”

“A Christmas baby. That will be nice.”

“The ultimate irony,” said Mary, “How’s Edwin doing? When are you two getting married?”

“Ha ha. He’s doing as best as we can hope for. He’s a little hard of hearing but can still get around. He goes down to his store Thursdays, Fridays and Saturdays. He even sells something once in a while. We still use his apartment when we need some privacy, the assisted living is nice, but, well you understand.”

“Now I’m blushing,” said Mary, laughing, “I’m starting to break up—we’re getting near downtown. We’ll call you tomorrow, there’s lots to talk about. What is a good time?”


Monday morning found Sean at his lawyers, going over the Regelind Estate.

“Here is the detailed inventory of your grandmother's artwork,” said the lawyer in charge, “A photograph and detailed description of each canvas. Also, as we mentioned the other day, there is a box of correspondence and several folios of what are described as ‘miscellaneous drawings.’ There’s no description of those items.”

“Are there any of Regelind’s papers or data concerning The Brotherhood?” asked Sean,
“If there were, they could be a problem in the future.”

“No. There is evidence that his personal papers, as well as all his computer data, had been removed. No hard drives in his computer, no evidence of off-line storage. The Brotherhood was a secretive bunch. There were traces of computer parts in the rubble of the Chamber House after the explosion. The FBI has all that, although from what we’ve been able to determine any information on them is beyond recovery.”

“And the other effects of the house and grounds?”

“Our appraisers concluded that there was nothing of exceptional value. The simplest way to dispose of the land, the house and its contents would be through a broker. There are several reputable firms who have expressed interest in brokering it in toto.”

“That would be great. Pick one with a decent reputation, I don’t care which,” said Sean, “When I can I get Emily’s materials?”

“We can have them on their way by Wednesday, via air freight. You should get them by Friday. Do you want them shipped to your apartment? There will be several large boxes.”

“Yes. I’d like that. I’ve got room. I want to have them in my possession before the rest of the deal proceeds.”

“This artwork must mean a lot to you.”

“It’s all that we have left of Emily.”