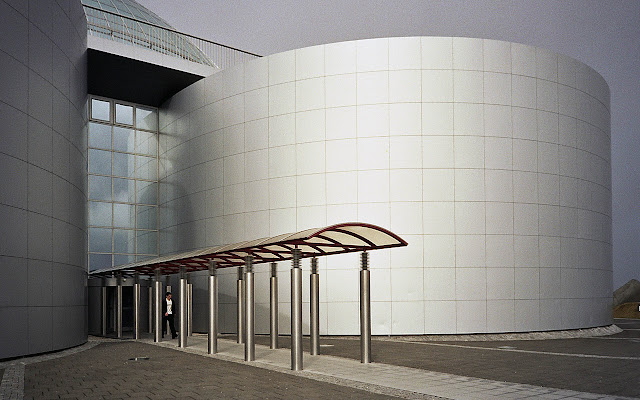 This picture is from the very first day I was in Iceland, March of 2000.

Located on a hill (Öskjuhlíð) overlooking Reykjavík, this amalgamation of water tanks, public space, museum, restaurants and an observation deck is one of the first things in Reykjavík a newbie to Iceland finds amazing (TIP: sit on the Driver's side of the Flybus when going into town.) It's a pretty neat place with a fancy rotating restaurant on the top. That restaurant is quite expensive (although not as pricey as Dill) but there are lower-cost dining options in the complex as well. As an attraction, Perlan (with the surrounding area) is well worth a look if you have a couple of open hours. I went to it again in 2004 and that was enough for me. It remains an attractive building, the view from the University district is quite photogenic, especially with a telephoto:

In 2000 Iceland was an odd place to go for a winter vacation; The Weaver and I saw few other tourists and had most of the museums and other attractions to ourselves. That year Iceland received about 500,000 tourists, most in the summer months. This year the number is expected to be triple that amount and you will run into swarms of tourists everywhere, anytime of year.

It couldn't stay a secret forever.