How Does it Feel? 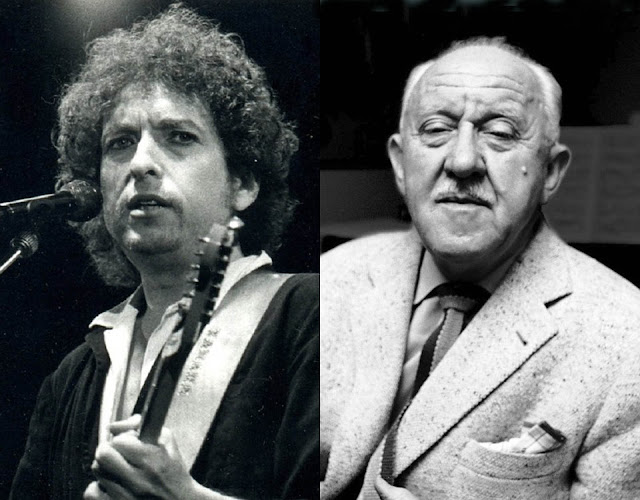 I woke up yesterday to the startling news than Minnesota’s own Bob Dylan has joined a very exclusive club—Nobel Laureates in Literature. Our state had been tied with Iceland (Halldór Laxness) in that category but now we have TWO (Sinclair Lewis is the other). Looking at it from a per capita point of view Iceland is still way ahead but, nevertheless, I take a vicarious sense of pride in Bob’s accomplishment.

Finding a commonality between the two is difficult, but not impossible. They both took new names and their careers overlapped for a time: Laxness was polishing up his take on new-age poseurs in Christianity at Glacier at the same time Bob and The Band were visiting “Old Weird America” in The Basement Tapes. They shared a great respect for the films of Charlie Chaplin. A less coincidental similarity is that both figures were extremely well immersed in their respective cultures, and both championed the worth of the common people. In addition, they both had spiritual detours: Halldór entered a monastery in the 1920s, and Bob had his born-again era in the late 1970s. Both produced lasting works from these side-trips, and both moved beyond them. Laxness ultimately ended up with a vague form of Taoism (he was buried a Catholic, however) while Bob remains inscrutable in his spiritual beliefs.

Laxness produced a massive body of written work, while Dylan has produced a comparable amount of classic songs. Both had 6 decade careers, both are masters of the well-turned phrase. As an influence on modern thinking, Laxness has had a major influence in Europe but remains a minor figure elsewhere. Dylan’s influence is profound and deep across many cultures in the world.

This is the best comparison of Bob to Halldór that I’ve found so far:


One of the primary grievances of the out-groups… is that their voices are not heard and respected among the elite. Their concerns about diminished social and economic status, the failure of their communities and families and the general sense of abandonment are treated as collateral damage by elites, who condescend to them without actually understanding the cause of their pain.

Bob Dylan’s art, at its finest, dignifies those voices. He is not of those communities by origin, but he has embraced them so deeply and consistently through his six-decade career that he speaks on their behalf with clarity, conviction and authenticity. At the same time, he is an advocate for social justice at the most basic, human level, and in his mature work refuses to reduce either side of a discussion to caricature.


That’s about as close to Laxness as you can get.


I'm looking forward to Bob’s Nobel acceptance speech, I’ll be comparing it to Halldór’s, that’s for sure.

When do you think we'll be nominated?

“And the Nobel Prize in Blogging is awarded to… ”

I used to always include Bob Dylan in my poetry unit when I taught middle school.

I actually attended the Nobel Prize Ceremony in 1991. It's hard to know what to wear to that event. Obviously, it's a formal affair, but dresses are not warm and Stockholm is freezing in December. I did end up suffering for fashion quite a bit that evening-- if only I had had a floor length fur coat! I confess I fantasized quite a lot about being on that stage, instead of in the audience.

“ …I actually attended the Nobel Prize Ceremony in 1991.”

Why am I not surprised at this fact?