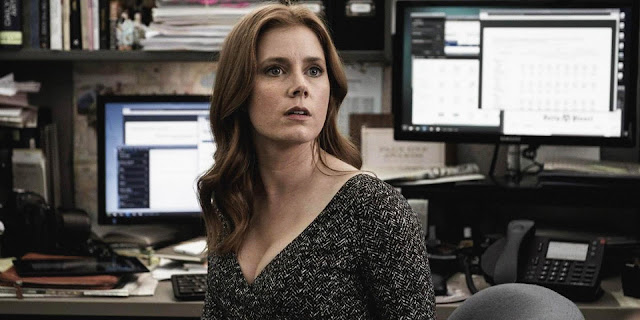 It has been a long time since I've reviewed a new release movie. Director Denis Villeneuve’s sci-fi drama Arrival is the rare "blockbuster" that is worthy of mention. Arrival is based on based on the 1998 short story Story of Your Life by Ted Chiang. Although it has moments of awe (and vertigo) the story is the thing here, a looping, reflexive narrative that not only comes to a conclusion, but also leaves the viewer haunted. Anyone who has raised a child will be especially touched.

The small cast of actors with speaking roles is headed by Amy Adams, a linguist who is impressed into service to establish communications with aliens who have arrived at twelve points on earth in gigantic "pods." Adams gives an inspired performance that is both bold and extremely intimate. Jeremy Renner portrays a physicist, and a senior military official is played by Forest Whitaker. Michael Stuhlbarg is an antagonistic CIA agent while Tzi Ma is Chinese General Chang. All fine actors, but not exactly a typical blockbuster lineup. The real stars of the film (besides Adams, who is Oscar-worthy) are screenwriter Eric Heisserer, editor Joe Walker, and composer Jóhann Jóhannsson; their contributions are extraordinary. Villeneuve’s direction is assured and paced, although a bit hokey at times. The cinematography, by Bradford Young, is fairly murky throughout, I assume it was to give a thematic consistency to the film. His close-up work with Adams, however, would make a stunning short film by itself. His use of shallow-focus was used to great effect in the close-ups, but in group scenes many of actors were out of focus, taking away from the realism of the shot. The aliens were great.

One caveat: I saw this film in a modern multiplex cinema with digital projection. Part of the murkiness I saw may have been due to an under-powered projection lamp. A movie in 2016 should be at least as vibrant as the remastered Perry Mason episodes I’ve been watching on TV recently—and they are in black and white! This should look good on a DVD, however,  but make sure that your subwoofer is up to par.