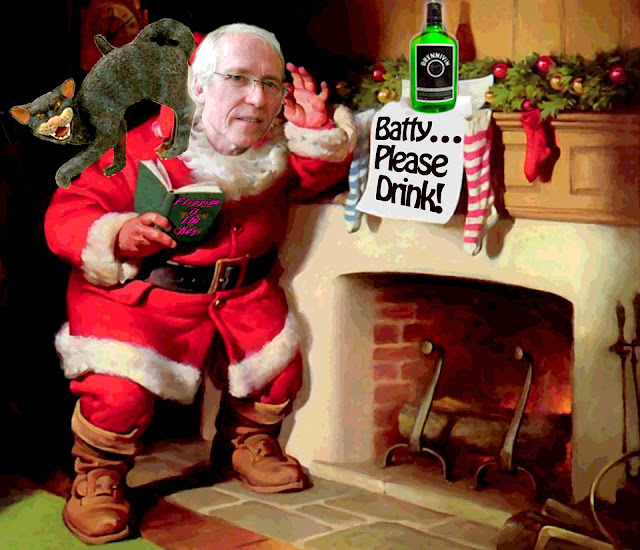 ‘Twas the night before Christmas, in Flippism’s house
Professor Batty was Blogging; I’m that cranky old louse.
My boots were brown leather—a worn-out old pair,
In a fur-trimmed red suit, I sat in my chair.

My eldest had come home from Washington State
And was now in his old room, in bed with his mate.
The Weaver slept while keyboard yet did I tap,
“I’ll just stop for a minute,” I said, “To fix a nite-cap… ”

I went in the kitchen to take care of the matter,
“Whiskey or Brennivín?”—I chose the latter.
I poured out a double—downed in a flash,
“I’ll only have two to avoid getting smashed. ”

The booze in my belly gave me a warm glow,
And my brain became woozy, unsurprisingly so.
When what to my wondering eyes should appear?
Grýla the hag—with her bag—something to fear!

“Now Dang me! I’m Loaded!
I’m Blotto, and Vexéd!
Oh go on! Forget it!
I’m Dizzy, and Wretched!
Away from the counter,
I’ll go down the hall
And dash away! Dash away!
Dash away from y’all!”

Dry heaves come afore the purging begins,
So I fell to the floor, bruising my shins.
Into the bathroom I recklessly flew,
Wracked with the shakes, to the porcelain loo.

And then, in a twinkling, the feeling did pass,
Shaking my head I thought “It must have been gas!”
Under my breath I said “I must turn my life ‘round,
For drinking on Christmas I am such a clown!”

Then returning upstairs, I twisted my foot,
and cursed to myself: “Das ich nicht gud!”
Just then the Yule Cat jumped high up on my back,
His sharp claws dug in as he made his attack.

My eyes-how they teared up! My back, oh how scary!
My skin began bleeding, blood-red like a cherry!
That cat took a swipe at my naked left ear,
and finally jumped off, scratching my rear.

Then my ankle he bit, with his needle-like teeth,
I reached for the wall but got a fist full of wreath.
“Drat that cat!” I exclaimed as I fell into the tree,
I could swear that that feline was laughing at me!

He was scrawny and mean, an evil old elf,
I cried as I realized that Grýla had bought him herself!
A mad gleam in his eye, he vanished with a twist of his head,
I then knew ’twas time to be off to bed.

I spoke not a word, but went straight to my lover,
Took off my glasses and then turned down the covers.
And laying a finger beside my bloodied nose,
I dabbed it with tissue as I took off my clothes.

As I crawled into bed, my spouse gave a whistle,
My carcass looked as if it had been beaten by thistles!
Then she exclaimed, 'ere I slept for the night...
“Merry Christmas honey, uh… who won the fight?!”


First published, in a somewhat different form, in FITK, December 24, 2007
With my apologies to Clement Clarke Moore

At least Krampus didn't show up yet?

And that is why they call it "Black Death".