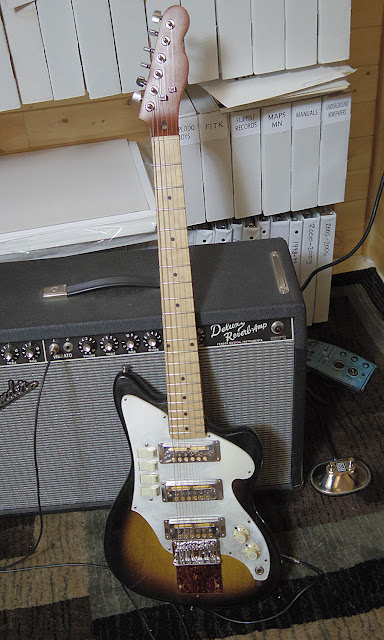 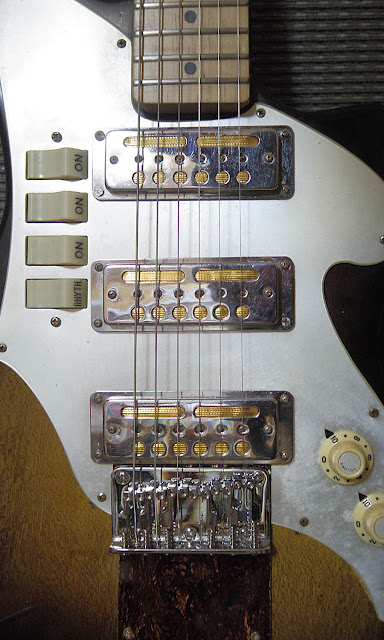 My buddy Mark gave me a call from his guitar store last Saturday.

“I’ve got one of those old Japanese Electric guitars you like. You might want to take a look at it.”

When I arrived, I saw a flashy, albeit decrepit, Zen-on guitar, Model ZES-80t. Every thing about it was either broken, out-of alignment, or just not very well designed in the first place. In the 1960s, at the height of the British invasion, U.S. department stores sold these (and similar) guitars under various brands, this one did not have a label, it was probably an “Audition.” I bought it (for less than it cost new in 1965) and set to work, “bringing her back” to playable condition. The “gold foil” pickups were the real prize here, easily worth more than I paid for it. Mark repairs guitars, but he lacks my masochistic temperament (and he also likes to actually make money on his repairs!)

The biggest problem was its neck. More suitable for playing baseball, it had also been broken once and the tuners were bad. I had a couple of spare necks (doesn‘t everybody?) so this issue, the biggest problem, was easily solved. A tougher challenge was the pick-guard, which held all the electronic components. It had warped over the years and needed to be flat to assemble the instrument properly. Ten minutes in the oven at 225°F while sandwiched between two baking sheets relaxed the plastic to its original flatness. The pick-guard had also shrunk slightly, but that was fixed by enlarging the holes where the components were attached and drilling new holes where the guard attached to the body. The third problem area was its bridge. It was intact, but poorly designed. I had an extra bridge as well. After re-wiring the guitar I reassembled it and it was better than new.

Just what I needed—another guitar!

Very cool! If I had a safe and secure place to do that kind of thing I probably would. I would definitely call you for advice and ideas.

That pic guard fix is a half baked idea!

I should have added chocolate chips…

Can you ever have too many guitars?... or motorcycles!