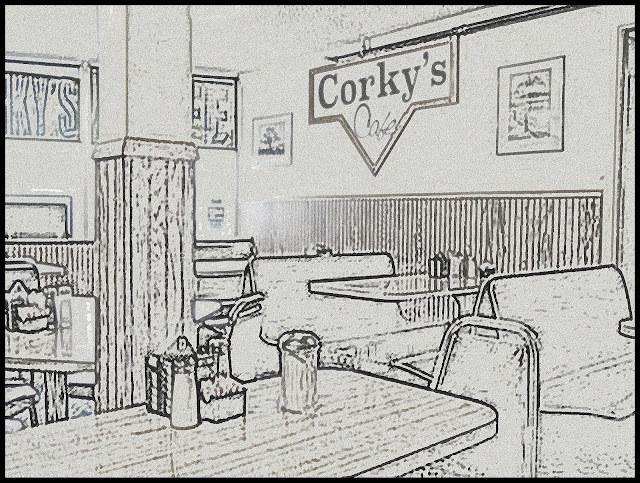 Andy stood at the kitchen door as Evelyn’s car backed out of the driveway.

After the sound of the tires on pavement had faded away, Andy realized that he had been standing there with his mouth open. “Like a goddamn cartoon character,” he mused, “A Goddamn Mickey Mouse.” He slammed the door. The sharp echo from the empty kitchen only added to his sense of unease. While their break-up was gaining momentum over the last few weeks, Andy had still thought that they were a couple: a couple in a horrible relationship, to be sure, but it was, at the very least, a commonality they could share. Now: nothing. He thought that perhaps he should eat something to get the bad taste out of his mouth. Going through the cupboards, he quickly realized that she had removed all the food—no she wouldn’t have just taken it, she would had given the dry goods to a food shelf and thrown the rest out in the trash. That had been picked up that afternoon. The only thing left was an empty jar of turmeric. That was her way, he thought, going the extra mile just to make things difficult for him. “Difficult,” was the world she used when she described their relationship. “When I was young, I thought that living with a man would be fun,” she once said, “But it was the hardest thing I’ve ever done.” Andy hadn’t thought it was very hard. As he stood alone in the empty kitchen, he was beginning to realize that he really hadn’t thought about it at all. He’d think about it, later, after he got some dinner.

Andy was a free-lance copy and re-write editor. When asked, he told people that his occupation was “reader”; it was the most fitting description of those various activities that he did for a living. It was also the best description he could think of to end the conversation. He hated talking about himself.

Corky’s Cafe was a throwback to the inglorious days of the local greasy spoon: a diner from the 40s, redecorated in the 70s, but certainly not upgraded since then. Andy made a habit of eating there whenever Evelyn would go out of town to visit her sisters. When he walked in, he saw that the tables were empty. There were some familiar faces at the counter, however, people he had seen around town, although none that Andy would consider a friend. He sat down a stool away from a bearded older man who was methodically devouring his plate of meatloaf and mashed potatoes.

“Hmph,” said the man, looking up from his food, “Now whatcha gonna do?”

“What are you talking about?“ said Andy.

“I heard about your fights with Evey,” said the man, “Word gets around in a small town like this.”

“Is it that bad?” said Andy, “I thought nobody cared about our domestic life.”

“People gonna talk, nothing more entertaining that the misery of others,” said the man with a smile, “Evey told all her friends all about it. She called you ‘That deadbeat.’ You need to get out more, you need to try some new things. You can’t spend your whole life with your nose in a book.”

The man snorted and returned to his meal. The waitress came up and asked Andy what he wanted. He thought that the look the waitress gave him was a mix of pity and disgust. She knows too? he thought.

“Burger and fries,” he said, what he always got. “The man with the mashed potatoes was right,” thought Andy, “On second thought, I’ll take the special,” said Andy, “Just for a change.”

The man with the beard looked up and winked at Andy.

“You know,” he began, “There are more pretty women than one.”

The Reader is serialized fiction, published every Friday.

And so it begins...
Thanks for something to look forward to.

Yay! Off we go. There are more than one pretty stories in the world......

I'm already wondering why she left the turmeric.

Thanks everyone ~ prepare yourself for some left-turns in the plot line.