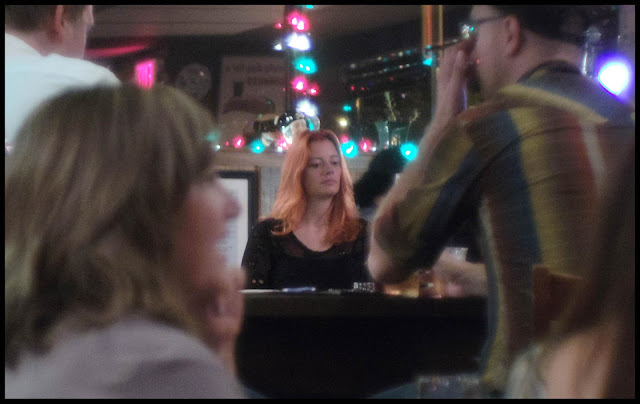 Andy left the diner and went down the street to the pub. He wanted a stout to erase the stale grease mouth-feel from the diner. “How can you make greasy mashed potatoes?” he wondered. Some of his old high school buddies had a band that was playing at the pub that night: Big Dick and his Hot Dogs.  The Hot Dogs were capable, inspired at times, “Big Dick” had a way with Little Feat covers. He was beginning to look his age. They usually played with an accordionist, but tonight he was missing—recouping from having had his pacemaker replaced. A woman was sitting in, singing Gershwin’s Summertime.

He wasn’t alone for long. Across the bar a slim, well-preserved 40-ish woman sat, nursing a drink. A redhead. Andy liked redheads. He caught her eye and they both smiled. To his surprise she came over, pulled up a stool beside him and asked if the seat was taken. She flashed an unapologetic smile, a smile without fear. She began to speak:

“I’m Jennifer,” she said, holding out her hand. Andy clasped it gently, as if it were a bird. He hadn’t touched a woman other than Evelyn for years. He hadn’t even touched Evelyn for months. Working at home—copy-editing e-files and manuscripts wasn’t the most sociable of occupations.

“Evelyn was probably right when she called me socially retarded,” thought Andy, “Although she didn’t have to be so mean about it.”

Catching himself frowning at the memory of Evelyn’s slur, he forced a wan smile. Jennifer didn’t notice either emotion. He thought that he’d try a more positive approach.

“I saw them play at Minnehaha Park a couple of weeks ago,” Jennifer said, “Old school, a little country, a little boogie. I like ‘em.” She moved closer to Andy, close enough that their thighs were touching.


The night club was crowded. Andy had gone to see the most recent incarnation of a band that he had followed one summer a couple of years ago. As he made his way to the other side of the room he saw Sally, a woman who he had also followed that summer. She was usually talkative, sometimes maddeningly so, but Andy didn't mind her loquaciousness; whenever she got wound up he would just sit back and let her words flow over him. Her voice was smooth, and she wasn’t afraid of letting it drop into a lower register; a true contralto. It never had the scratchy “fry” of so many of the younger women that he saw on TV or in the movies.

But tonight she wasn’t talking. Her eyes were on the band. Jessie, one of her former lovers, was on stage with a new group, trying to rekindle the passion he had once held for performing. Jessie would toss a glance her way from time to time. Most of what the group played was turgid blues, but when Jessie counted off an up-tempo version of Big Joe Turner’s “Boogie-Woogie Country Girl” Sally came to life. She started moving her leg in time to the music, her thigh touching Andy’s in a subtle dance: primal, arousing. Sally and Andy were friends, but never in an intimate sense. Once in a while, late at night, before she had married, she would call him and have him over to watch Alfred Hitchcock reruns on TV. She talked then. As Sally got into the music her mouth opened reflexively, she was becoming aroused as well. The song ended, as did her “dance.” She turned and smiled at Andy, her eyes flashing a silent thank-you. The band took a break and she returned to her talk mode, all the while keeping an eye on Jessie. The “fling” that she had taken with him, nearly five years ago now, had ended badly—for her.

All of Jessie’s flings had ended badly for the women.

“Care to dance?” Jennifer asked, “The band is good.”

”I’m sorry, I have to go,” said Andy, embarrassed, he felt as if she had been reading his thoughts. He stood up to leave. “Some other time, sure… ” he said, and then was out the door. His thigh felt warm where Jennifer had been touching it. Where Sally had touched it.

When he was in his car, Andy thought about going back into the pub. Jennifer was pretty, and not too young for him either. And he thought about Sally for a moment as well. A fling. No. He’d call Sally tomorrow. They’d get together for coffee and talk. It had been too long. Jennifer. A fling. No.

Instead of turning back, Andy headed for the all-night grocery.

Who is "Avery"? He who grasped gently...

No guts, no glory.

O ~ Avery was the original name for Andy, I missed updating that one! Fixed now.

Jono ~ Andy has some commitment issues…