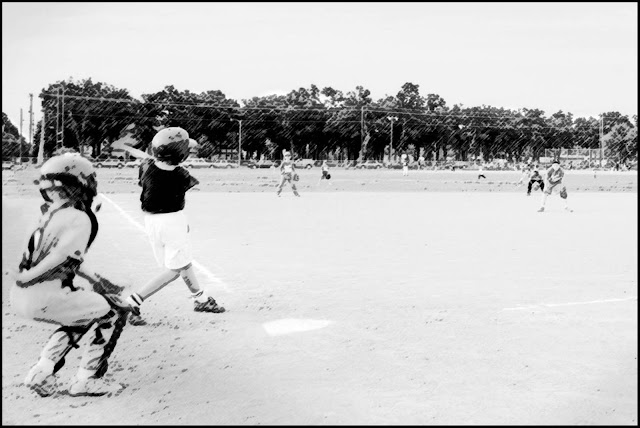 When Andy got home from the store, he put the groceries away and turned to the stack of papers on the table. It was more of the same from a client who had been assembling a memoir—a vanity project—Andy thought, but then again, wasn’t everything he read a vanity project? His client’s printouts were carefully double spaced with a wide margin for editor’s comments. Always hard copy, his client didn’t trust the internet. Andy doubted that this uninspiring life story would ever be published, but at least it was a change from the usual daily work of editing catalogs and technical writing. Although it was past midnight, Andy wasn’t particularly tired.

“May as well get some work done,” he mused, “Lord knows I’m wide awake.”

This particular assignment had been going on for several weeks now; if this new bucket of soggy nostalgia was anything like the previous ones, Andy knew that it would quickly put him in a frame of mind conducive to sleep:

T-shirt and a cap.

All we needed to make it to the top of the park board junior league was T-shirts and caps. The Macs, one of the other other teams that used Bohanon Park as their home field, had full uniforms—pro style—with matching caps. Some of their players even wore cleated shoes, and they were always the champions. Even their manager had a uniform.

The first year our team was together was pretty dismal. I think we only won one game—besting The Woodsmen. The second year we managed to pick up a coupe of ringers, good players who had just moved in and hadn’t been “scouted.” Fuller was a husky slugger with thick glasses. Barry was a ne’er-do-well who had missed too many practices with his old team, The Stans. He was a good player though, and a natural center fielder who could also cover most of right field when I was playing there. I would guard the line. My other position was second base. Both positions were saved for guys with weak arms.

We won our first four games. Fuller hit homers in each one. The fifth game was against The Shingle Creek Yankees, an odd choice of a name for an integrated team. The “real” Yankees were still lily white—they wouldn’t field a black player until Elston Howard in 1961. The Shingle Creek Yankees had a tall pitcher called Big George Jackson. He was already more of a man than a boy and would later go on to play basketball in college. His catcher was also mature, but in addition to his atheletic skills he was a pretty hilarious motor-mouth; funny until it was you who was standing in the batter’s box. I struck out a couple of times. In spite of that, when the top of the seventh was over we were up 3 to 2. Our pitcher was a gangly youth named Doug. He wasn’t what you would call dominant, but he could throw it over the plate. “A walk is as good as a hit”, they used to say, and Doug didn’t walk many. He would give up a fair amount of hits, though, and in the bottom of the seventh, The Yankees quickly put runners on second and third. Doug managed to strike out the next batter, so our hopes were high. I was standing out in right field and the coach told me to move back because Big George was up—he was a lefty and he could belt it. If it was hit to me and I did catch it, there was a chance that I could keep the runner from second from tagging up and scoring. We conceded the runner at third.

Big George looped Doug’s first pitch into short right field where it died like a rotten tomato thrown on a sidewalk. By the time I got to it the Yankees had tied, and my feeble throw was too late to stop the winning run from scoring.

Our championship dream was over, I walked home alone, fighting my emotions. When I got to my room, I fell on my bed and sobbed for hours.

The next week we played The Macs and got whupped. The Shingle Creek Yankees had beaten them and also beat The Stans so they were the new champions. In a few years, the best players from The Macs and The Stans would be playing baseball together in high school, while the black kids from The Shingle Creek Yankees played football and basketball. All of that is many years ago, of course; nobody talks about those days anymore.

The Bohanon Cubs are still waiting for their t-shirts and caps.


He thought about the woman he had met in the pub, “Jennifer? That was her name, wasn’t it?” and he found himself smiling.

He would sleep tonight.

So... is the soppy baseball memoir about you, or just a parallel story? Inquiring minds would like to know. I'm asking for a friend. Not really.

“The audience, which had been at first indifferent, became more and more interested.”

LOL. Not indifferent at all, actually. But I see you are not saying anything. Oh, well. I'll have to keep reading.

Strunk and White is the first refuge of a scoundrel…