I've been on a book binge recently—collecting vintage copies of Robert Benchley books. Benchley was a gentle humorist who published many articles in various magazines and newspapers in the 1920s and 30s. He was also cast as a comic character in numerous Hollywood movies in the late thirties and early forties.

His regular illustrator, Gluyas Williams (a buddy of Benchley’s when they were at Harvard), was a perfect match for Robert’s droll wit. Usually portraying Benchley as a eternally befuddled milquetoast, Williams’ line drawings are little masterpieces of observation: 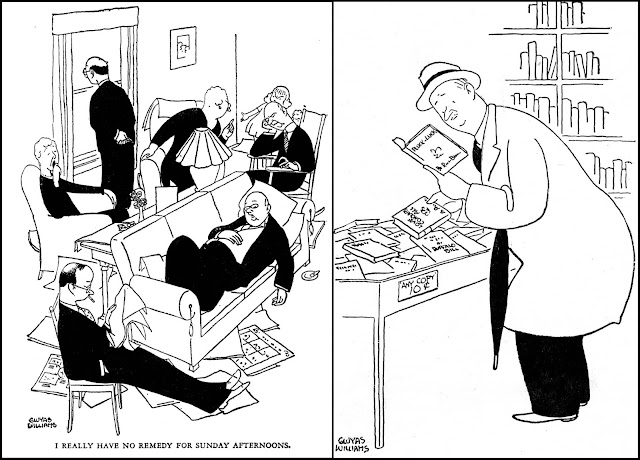 With such titles as: My Ten Years in a Quandary (and How They Grew), From Bed to Worse (or Comforting Thoughts About the Bison), 20,000 Leagues Under the Sea or David Copperfield, and The Treasurer’s Report & Other Aspects of Community Singing, it quickly becomes apparent that you are dealing with one of the finest absurdist minds in all of literature. The individual essays are generally short and cover almost every aspect of mundane existence. There a quite a few pieces on train-travel, as well as humorous treatments of sports, politics, and even some satires on the writing styes of Dreiser, Lewis and Mencken. The earliest book I have, Of All Things, dates from 1921. With its numerous obscure names and archaic words, it can be baffling at times. Google is your friend.

Benchley died in 1945 but various “new” titles continued to be published for many years. They were compilations from his previous books, usually featuring the more “universal” of his essays. Those books aren’t as nice, and the illustrations were often printed from the worn-out plates of earlier editions. There are also modern trade paperbacks of his work. I haven’t seen them so I can’t comment on their quality.

The 1920s books are a little lighter in tone but more dated, while the 1930s books are generally better, with more and better Gluyas Williams’ illustrations.

One note: the frontispiece of No Poems includes this bizarre illustration: 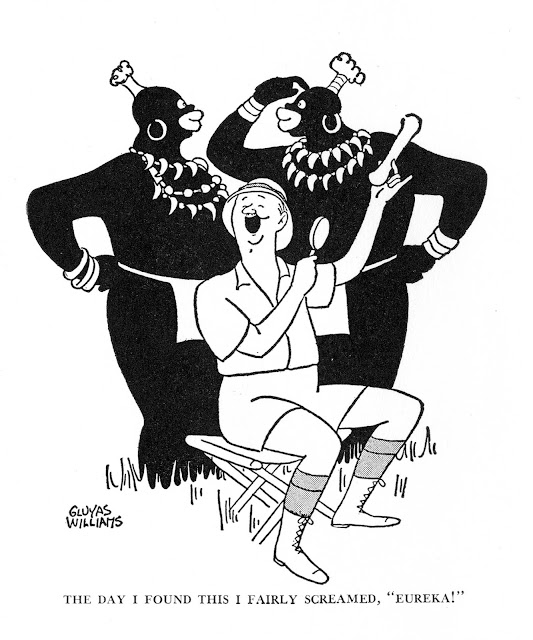 It is out of character for Benchley, who was a champion of civil rights, and while there are other instances of “non-PC” writing in the text and images of these books, it is worth remembering that times change, especially in the field of humor. It may take the modern reader a while to “get” Benchley, but it is worth the effort. A little poking around the internet will turn up many of these titles in PDF versions.

Do you have Rude Jokes?

No. Haven't run across that one yet. All acquired before Internet search capability.