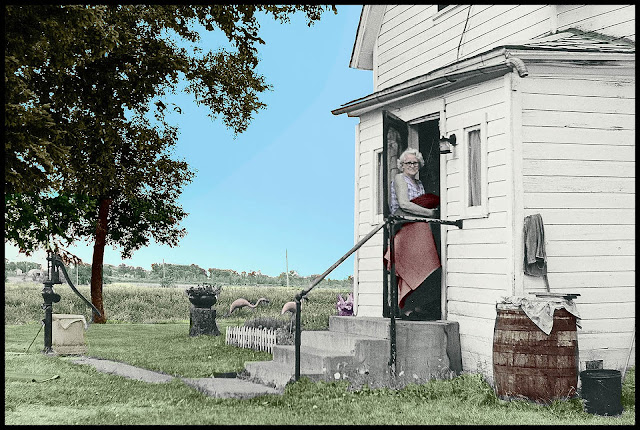 
I dreamt of grandmother last night. I was at her farm, the old place in the country, a couple of miles outside of a small town in central Minnesota. It was in early summer—when the farm yard always looked so nice—the fresh green grass was peppered with dandelions and the shade garden was formed by the row of trees on the north side of the house. She was standing in the porch doorway, beckoning to me, she wanted me to come into the house. I went in, it had been remodeled, what was once a tiny kitchen had been tastefully expanded. I sat down, at the old oak kitchen table, with my grandmother (who looked the same as she always had), and she began talking to me, telling me about she the new gravity-fed water system, with its plastic tubing going to the sink and lav. Primitive, to be sure, but better than hauling water. It was leaking, so I examined it and told her that I would fix it for her. And then she was gone, and I was alone in the house.

Andy put down the manuscript. He was generally wary of dream sequences. This one was no better than usual but since he was only doing a light edit it didn’t warrant any major changes. Andy never dreamed about his relatives. His mother and father had died in a car crash the previous year, six months after they had retired. They hadn’t left him anything of value and it cost him most of his savings just to have a funeral and clean out their apartment. Andy was actually living in their house, in a joint tenancy relationship with his father that had been established years ago, before he met Evelyn. Because they never married, he had been assured that Evelyn had no claim on it. He hoped that the lawyer  knew what he was talking about.

Andy never really knew his grandparents, all four of them had died by the time he was old enough to form any memories. Thinking about all this, even though there was nothing he could do about it, made Andy sad, in a vague sort of way. He reluctantly returned to the manuscript:

I had been captured by a witch. I was being held in a small chamber in a cave. I could see through a small hole in its wall to another chamber, a chamber illuminated by a fire that cast a reddish-orange glow over the scene. The witch was cackling with glee over an infernal contraption, a metal rack, fitted with the amputated penises of young boys, boys such as myself. She pulled a lever and all the penises began to urinate. I went back to sleep.

I was in a rowboat on a small lake. It was dusk, I knew I should head to shore, but I didn’t know where I had come from. I saw a house on the shore, an old Victorian mansion, with gables peering out from among the bare trees which surrounded it. There was a small dock where I tied up the boat. As I began to walk toward the house, I looked up and saw the form of a hideous monster looming from a widow’s walk along the roof line of the house. Seized with panic, I woke up. I went and sat next to my bedroom window and breathed in the cool summer air. It was 5 in the morning, when the sky was just getting light. I didn’t go back to sleep.

I was running away, it was wartime. I knew that what ever was after me was unstoppable, men, guns, tanks, all manner of destruction. I had ended up in an industrial part of town. All the factories had shut down due to the war. I was surprised to see that one building had light coming from a doorway. It was a big fire-door, slightly ajar. I pushed with all my strength and saw silhouettes of a woman and a girl, huddled between me and an intense fire that raged in a furnace in the center of the building. As my eyes adjusted to the scene, I could see that the woman and the girl were dressed in rags. The wore hooded shawls, now tattered but they had evidently once been fine clothes. I stepped closer and, sensing my presence, they turned and looked at me. Their eyes were orbs of fire, the same fire as that of the furnace.

The memoir was heading in an unwelcome direction. Andy needed a walk. And a drink.

He put the manuscript down and went out.

The Reader is serial fiction, published every Friday.