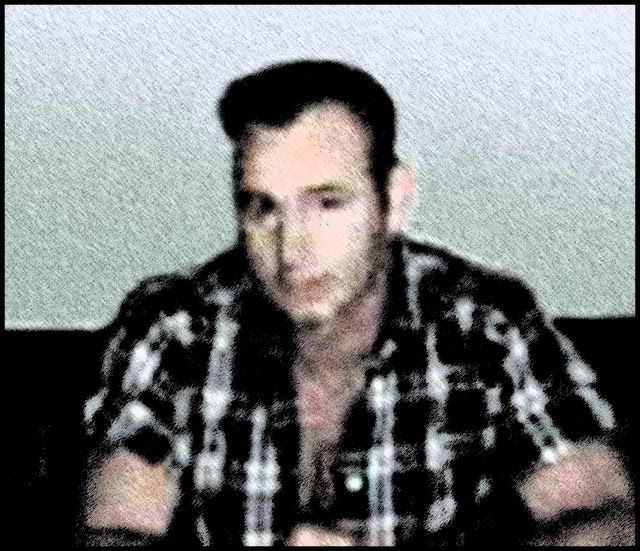 The Swansong of Larry Lovejoy.

Andy was nursing his beer, trying to make it last through the night. The pub wasn’t very crowded; Thursday nights were never busy. When the band took a break, “Big Dick” came over to his table. He had a 45 rpm record in his hand.

“Look what I scored! White Lightning by Melvin Winton. 1963, rockabilly style,” said Dick, “It was recorded at Kaybank.”

“Mel’s still playing, he must be nearly eighty now,” said Andy. “Do you know who was in the band?”

“Larry Lovejoy? Wow, there’s a name from the past,” said Andy, “He’s been dead now for what—forty years?”

“I met him once, you know,” said Dick, “Actually twice. We had a gig in the old hall above Howie’s, on West Broadway. We were setting up in the afternoon, and Larry just sort of wandered in off the street. Jessie knew who he was and started talking to him. Jessie had his old Gibson then—the 355. Larry said something like ‘Nice guitar’ and Jessie handed it to him and asked if he would like to play it. Larry held the guitar as if he would play, but it seemed that he was already too far gone, his fingers twitched a little, but he couldn’t bring himself to play anything. I saw him about a year later, just before he died, outside of Penny’s Supermarket on Lyndale. He was with a young woman, his daughter? His girlfriend?  They were waiting for a cab. He was looking pretty bad.”

“I had heard stories about him. For a while there, in the mid-sixties, he was a local legend for his blues-rock guitar playing. I never knew that he played country harmonica,” said Andy, “You heard about the time he subbed for Billy Mason, when Billy and the Bears played in Moorhead?”

“He subbed for Billy in Billy’s own band?” said Dick, “When was that?”

“Must have been about 1975. That’s when Billy was drinking so much that the band wouldn’t let him play with them,” continued Andy, “They were worried that he would have a meltdown in a place where they didn’t have anyone to bail him out, so they got Larry.”

“Larry dropped acid just before the show,” said Andy, “The club had a wall of mirrors at the back of the stage and Larry played the whole show with his back to the crowd, looking at himself. He was awful. The guys in the band were pissed, at Larry fucking up and Billy for being drunk all the time. When they got back, they gave Billy an ultimatum: quit drinking or break up the group. Billy went through rehab. Larry never did. That Moorhead trip might have been the last time Larry Lovejoy performed.”

Andy felt a hand on his wrist.

“Now don’t you run away again on me,” she said.

“I’m not interrupting anything important, am I?” she said.

“Just ‘band’ talk,” said Dick, “An old story about someone that hardly anybody remembers. If you’ll excuse me, I’ve got to get back on stage.”

Andy felt good, and with Jennifer sitting beside him, the memory of Evelyn was fading fast. He would force himself to be friendlier tonight.

I like a woman who's not afraid to ask for more.

"Big Dick" is my trucker handle.